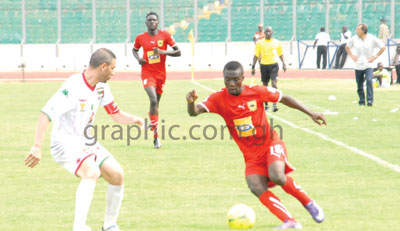 After witnessing their idol club bundled out of the CAF Champions League at their own backyard, a number of angry fans of Kumasi Asante Kotoko created a barrier at the Baba Yara Sports Stadium in Kumasi threatening to cause mayhem to the team and technical men.

Moments after referee Bakary Papa Gassama of the Gambia blew his whistle to end the game which saw Algerian side JSM Bejaia dump Kotoko out of the competition on the away goal’s rule after a 1-1 draw in regulationin their own backyard, disappointed Kotoko fans threw their hands in the air in despair wondering when the club would make them proud again to bring home a continental trophy after 30 years of waiting.

While a number of the fans trooped out of the stadium verbally attacking the players for what they described as lack of commitment and below-par performances yesterday, others directed their anger at the technical team who directed affairs.

They took the Mas-Ud Dramani-led technical team to the cleaners, accusing them of lacking the ideas  to produce the needed results at a time when superior technical direction was expected of them.

Many of the heartbroken fans however refused to leave the stadium hours after the game ended. They rather barricaded the main entrance of the stadium by building a human wall with the intention of preventing the club’s chief executive, Dr K.K. Sarpong, and other officials from leaving the stadium.

To those fans, the Kotoko management were only eager to transfer potent players from Kotoko to other clubs at a time  the team were struggling to make an impact at the continental level.

An angry fan, Opoku Mensah, told the Graphic Sports in an interview that Kotoko lost the match against Bejaia because many of the current players lacked the qualities to play such a high profile game.

“Many of the players who featured today do not deserve the honour to wear the Kotoko jersey. For the past three years, the Kotoko management have sold many good players who could have made a stronger impact on today’s game,” he fumed.

“We filled the stadium in our numbers today hoping that we would return home  smiling, but look at the performance of our players. How can we win trophies with such ordinary players?” he questioned.

It was a game that Kotoko fans trooped into the stadium with high expectation after the club played an impressive scoreless draw game in the first leg match in Algeria.

In a rather quiet first half which Kotoko failed to create meaningful scoring opportunities, Michael Akuffo raised their hopes after putting the Porcupine Warriors ahead in the 44th minute with a 35-meter free kick.

In an attempt to save the well-taken free kick,  Bejaia goalkeeper, Cedric Mohammed, got injured when his head hit the goal post and had to be replaced.

Determined to hold Kotoko and prevent an early goal, Bejaia built a strong defensive wall around Brahim Zafour, Rachid Mekheldt, Zidane Mebarakov and Toifik Zerara who effectively held Kotoko attackers, Kofi Nti Boakye and Seidu Bancey, in check. In one of their moves to penetrate their opponents’ defence, a Kotoko player was fouled deep into the Algerians’ half for an infringment. Akuffo brought the impatient crowd to their feet with a David Beckham-like free kick for the opening goal.

Kotoko started the second half full of determination and succeeded in taking the game to their opponents, but Bejaia continued to hold them and used the flanks to attack.

In the 57th minute, Bancey came close to increasing the tally for Kotoko but fumbled in the box and allowed an opponent to clear the ball to safety.

The visitors gained confidence as the game wore on, and in the 73rd minute Mohammed Derrag unleashed the knockout punch when he outpaced his marker and played the ball beyond the reach of helpless Abdoulaye Soulama who was left stranded  in post for Kotoko, for the equaliser which qualified the visitors to the next stage of the competition.