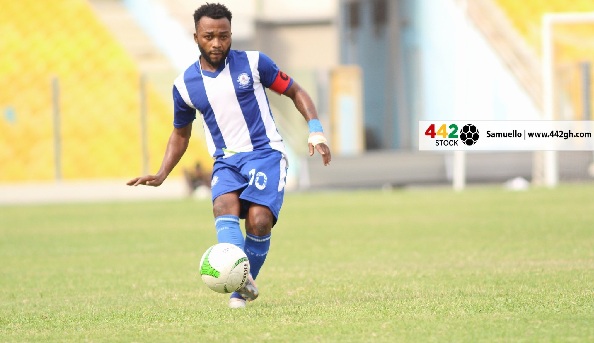 Premier League champions, Accra Hearts of Oak, are close to concluding a deal with Great Olympics’ influential midfielder, Gladson Awako, to bolster their squad as they prepare for thier CAF Champions League campaign next season.

The contract of the 31-year-old Under-20 World Cup winner with Olympics is expected to run out in November, making him a free agent and the league champions are hoping to offer him a way out.

Already, the player is said to be a huge admirer of the Phobian Club and has openly made his intention known to join them when they come calling.

Awako has a huge experience in the continental competition with Berekum Chelsea in 2011 and DR Congo side, TP Mazembe, in 2014.

The Phobians have tasked board member, Vincent Sowah Odotei, to reach a deal with the Black Stars player to allow him put pen to paper in the coming days.

Hearts are on the transfer market seeking to improve their title-winning squad with the aim of impressing at their first continental campaign in over a decade.

According to sources close to Hearts, negotiations were far advanced between the Phobians and Awako.

“The deal is very close and Awako is scheduled to meet Vincent Sowah Odotei to conclude negotiations,” said the source.

“He is a player that the club wants to acquire and as it stands now, I can only tell you that Awako joining Hearts is just a matter of time.”

Awako has been an instrumental figure in Olympics’ transformation this season, following his free transfer move to the top flight side in 2019.

His splendid displays helped the Wonder Club earn four points from city rivals, Hearts, after securing 2-0 and 1-1 results in their two league encounters in the just-ended league