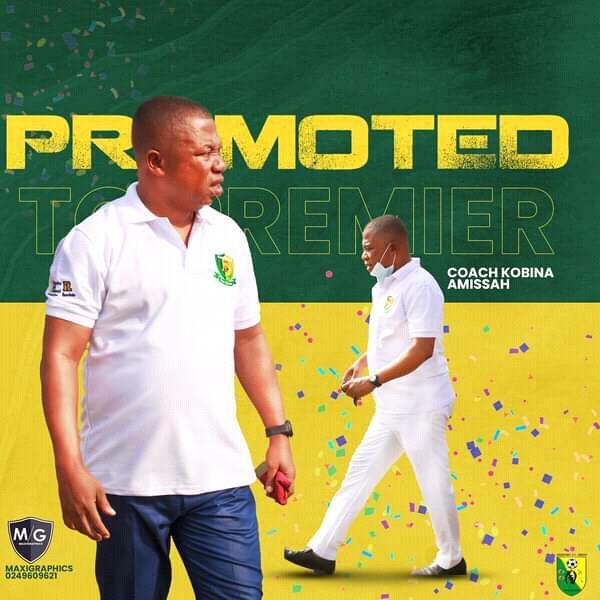 Bibiani, a mining community in the Western North Region, will be thrown into a carnival mood on Sunday in celebration of Goldstars’ qualification to the Ghana Premier League (GPL).

Goldstars booked their place to the GPL last week with 62 points from 29 matches ahead of their last two matches.

Despite losing 1-3 to Samartex 1996 last Sunday, the management, technical team and playing body of Goldstars are set for a grand celebration on Sunday, knowing too well that their last league match against Wassaman FC at the Bibiani Dun’s Park is merely for the records.

“We want to broaden the smiles of our numerous supporters in the Bibiani township and beyond. It is for this reason that we are going all out to beat Wassaman mercilessly on Sunday to turn Bibiani into a dancing theatre,” the head coach of Goldstars, Kobina Amissah, told the Daily Graphic in an exclusive interview .

He gave the assurance that all the players who helped the team to qualify would be featured against Wassaman on Sunday.

“When we lost 1-3 to Samartex last week our supporters were not happy, so we will make amends on Sunday by defeating Wassaman by a wide margin to prove that we are worthy champions in our zone,” Coach Amissah pledged.

“We will play with Wassaman as if it is the deciding match for our qualification to the Premiership, so we are taking it very seriously. This explains why we will field all our gallant stars.

“Our dependable goalkeeper, Ernest Kusi, will be in post as usual, just like our potent striker, Prince Kwabena Owusu Ansah, who has scored 18 goals so far in the league, Isaac Baah (Zoomlion), Gottfried Kyei and Nuhu Sulley,” Coach Amissah revealed.

Meanwhile, the Daily Graphic has gathered that some officials of the Ghana Football Association (GFA) will be in Bibiani on Sunday to crown Goldstars as champions in Zone Two of the Division One League (DOL).