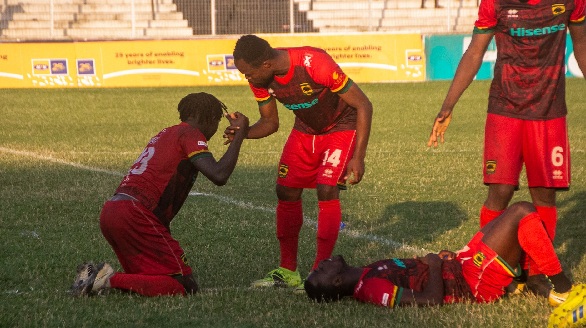 Disappointed players of Asante Kotoko after their defeat Follow @Graphicgh

Kumasi Asante Kotoko’s journey in the MTN FA Cup came crashing yesterday after they were dumped out of the competition by Berekum Chelsea in the quarter final stage at the Obuasi Len Clay Stadium.

Chelsea won 5-4 on penalties after game ended goalless 120 minutes of play with Kotoko’s Brazilian import Fabio Gama missing the opportunity to put his side ahead when he missed a penalty in the first half.

The win adds Chelsea to the other three qualified semi-finalists - Hearts of Oak, Ashantigold and Medeama- as Kotoko’s season ended without a trophy.

Meanwhile, Medeama managed to beat minnows Attram De Visser 3-2 after the Division Two side came from two goals down to equalise.

However, a late penalty which was scored by Prince Opoku Agyemang helped qualified the hosts to the next stage of the competition after Benjamin Arthur and Ahmed Toure’s goals were cancelled by the Attram De Visser.