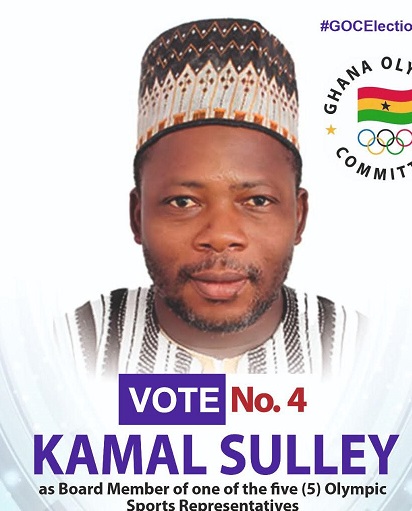 Some delegates who are eligible to vote in the upcoming GOC elections have thrown their weight behind an aspiring board member of the GOC, Kamal Sulley, in a telephone conversation with the GraphicSportsOnline.

The delegates who want to remain anonymous and numbering about 20 told the GraphicSportsOnline that Kamal Sulley has a genuine mind and heart towards helping the least financed sporting disciplines if voted as a GOC board member.

They entreated other delegates to vote for Mr Kamal Sulley, who is also the Vice-President of the Ghana Rowing and Canoeing Association (GRCA) to enable him bring his expertise to bear on the board.

“Mr Sulley has been supporting many lesser known or least financed sporting disciplines since he started doing sports over two decades ago. He has sports development at heart, and if voted he will help with sports development in our country,” they told the GraphicSportsOnline.

Mr Sulley is competing with nine other candidates to be on the board of the GOC. Five will be selected by the delegates on Monday, March 15, at the Ghana Academy of Arts and Sciences in Accra.

Sixty-four delegates are eligible to vote in Monday’s election which will also see voters choosing new president, first, second and third vice-president of the GOC.

Mr Kamal Sulley remains in pole position to be appointed onto the board in an elections that will witness other executive members also voted into various positions of the GOC.