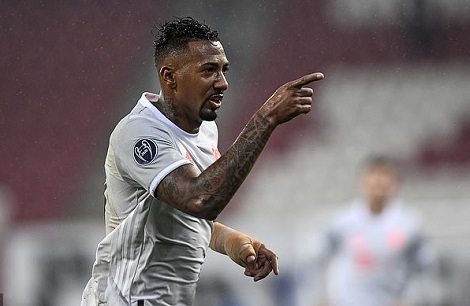 Jerome Boateng is free to leave Bayern Munich for nothing this summer - with Chelsea and Arsenal leading the chase for his signature, reports claim.

The German centre-back has played nearly 400 times since joining the Bavarian side in 2011 but his future at the Bundesliga giants is in doubt, with just months remaining on his contract.

The 32-year-old has been a regular feature in Hansi Flick's side this term, starting 20  times in the league this season to help the team fight for another domestic title, but his solid displays at the back will not be enough to convince the club to offer him fresh terms, according to Bild.

Boateng is 'disappointed' by a lack of support from the club, the report adds, and he only feels appreciated by manager Flick - with 'no sign from the club' that they will reverse their decision.

Bayern are said to be prioritising a new deal for Boateng's defensive team-mate Niklas Sule, who has just over a year left on his contract.

World Cup winner Boateng will have plenty of suitors if he does leave the Allianz Arena this summer, with Arsenal and Chelsea said to be huge admirers, as reported by the Sun.