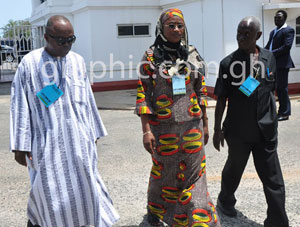 The Electoral Commission (EC) Tuesday complied with the Supreme Court’s order by filing its affidavit in the presidential election petition, declaring that it was impossible to falsify the votes cast and conceal the falsification.

According to the EC, which is the second respondent in the petition challenging the legitimacy of President John Dramani Mahama, the manner in which the 2012 elections were conducted and the participation of representatives of all the political parties in the procedures, at the constituency collation centres and at the EC’s strong room made it impossible to falsify the votes cast and conceal such falsification.

Tuesday, the court had to adjourn its hearing of the matter to this morning, following the inability of the EC to file its affidavit, although the deadline for doing so was to elapse last midnight.

At exactly 4 p.m. yesterday, the affidavit, which was deposed to by Mr Amadu Sulley,  a Deputy Chairman (Finance and Administration) of the EC, was filed on behalf of the EC.

Attached to the 15-paragraph affidavit were seven exhibits.

According to the EC, the initial complaint put forward by the representatives of the petitioners in their attempt to halt the declaration of the results of the presidential election was that there were discrepancies between the results in seven constituencies and the results announced by the commission.

It said, however, that when the petitioners filed their petition, they shifted their grounds and were only alleging discrepancies in three out of the 26,002 polling stations in which voting took place.

According to the EC, after it had established that two of the said three examples were wrong and the remaining one was the result of a transposition error involving 80, the petitioners had reduced the discrepancy to only one example and the votes as counted and declared at a polling station.

It said contrary to what the petitioners had stated, all political parties were provided with the voters register, pointing out that the ‘fake identities’ and ‘multiple names with a unique pattern’ which Dr Mahamadu Bawumia had alleged that the EC sought to hide were explainable.

The affidavit explained that Abdul Enusah Jamil and Abdulai Enusah were twins who were registered in New York and that extracts of the entries in the register/database on the two were attached as exhibits AS and AS1, respectively.

Furthermore, Abdul Mumuni Bashiru was registered in Berlin and the entries constituted a duplication error yet to be eliminated through the adjudication procedure regarding registration.

It said the relevant entries in the register/database were attached as exhibits AS2 and AS3, respectively, showing that duplicated entries were in the same polling station, making it impossible, in any event, for the registrant to vote twice.

The entry for Abdul Bashiru Ibrahim (exhibit AS4 and AS5), it said, registered in Dubai and Paul Yaw Essel (exhibit AS6 and AS 7), registered in Kuala Lumpur were also genuine duplication errors yet to be corrected.

The EC said there was no rational basis for the contents of the petitioners’ affidavit and the tables it contained which did not indicate which specific polling stations were being covered.

It said certain aspects of the petitioners’ affidavit were false and that polling stations were identified by their names and their unique polling station codes, while the serial number on a polling sheet was not a security feature.

Similarly, it said, there were several inconsistencies in the petitioners’ affidavit and same were denied and that the petitioners were also fastening onto errors committed in the completion of pink sheets by presiding officers that did not benefit any particular candidate or affected the number of valid votes cast at polling stations.

It said the reliefs being sought by the petitioners were without merit and requested the court to dismiss the petition.