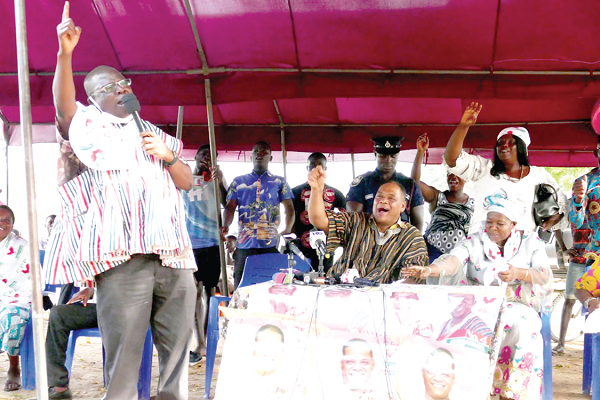 Mr Ivor Greenstreet, the presidential candidate of the Convention Peoples Party (CPP), joined by his running mate, Prof. Emmanuel Bobobee (standing), and Nana Sarpong Kumankuma, Chairperson of the party, to sing during a campaign tour at Battor in the Volta Region
30.5k Shares

The flag bearer of the Convention People’s Party (CPP), Mr Ivor Kobina Greestreet, has taken his campaign to Battor in the Volta Region, where he has asked the people to vote massively for the party in the December 7 elections.

Mr Greenstreet, who was in the company of his running mate, Prof. Emmanuel Bobobee, was speaking during a courtesy call on the Paramount Chief of the Battor Traditional Area, Togbega Patamia Dzekley, at his palace.

He told the chief that his running mate was from the area, for which reason they should recognise his contributions to the development of the people and offer the CPP the needed support to win the December polls.

Mr Greenstreet mentioned some of the many projects established by the CPP in the First Republic to include the Asutuare Sugar Factory and the Juapong Textiles.

Given the opportunity, he said, the CPP would establish new factories and resuscitate old ones not only in the region but across the country, as it continued with the vision of its founding father, Dr Kwame Nkrumah.

He added that when given the mandate, the CPP would implement what he called a ‘Green miracle’ to offer guaranteed and fair prices to farmers, including those in the cocoa sector.

Later at a rally, Dr Bobobee, who is an agricultural engineer, told the people that Ghana had witnessed about 20 years of National Democratic Congress (NDC) and New Patriotic Party (NPP) rule without much to show for it and so it was time to return the CPP to power for accelerated development.

Togbega Dzekley called for decent campaigning and urged the leadership of the contesting parties to also ensure peace before, during and after the elections.