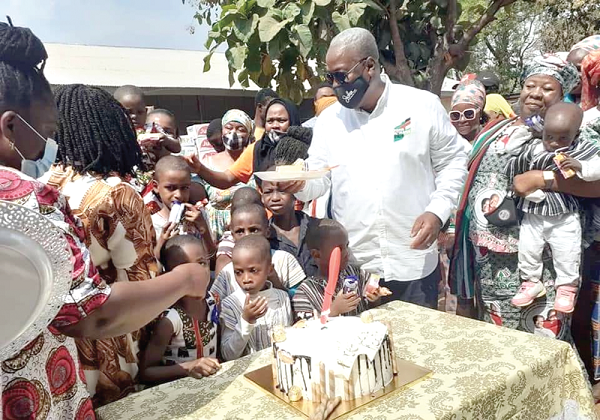 The presidential candidate of the National Democratic Congress (NDC), Mr John Dramani Mahama, yesterday celebrated his 62nd birthday in Tamale, at which he expressed his readiness to accept the outcome of the December polls.

“I wish all Ghanaians the best and I feel blessed to be alive and in very good health at 62. I wish that everybody had a healthy and long life as we look forward to peaceful elections. The will of God should prevail in whoever He decides on to lead this nation for the next four years. He should let the person prevail in the election,” he said.

The former President, who is seeking re-election in the upcoming December 7 elections, after losing the Presidency to Nana Addo Dankwa Akufo-Addo in 2016, also wished the electorate peaceful polls.

Former President Mahama was speaking at the Children’s Ward of the Tamale Teaching Hospital (TTH) where he had cut a birthday cake and interacted with patients and staff as part of activities marking his 62nd birthday.

Mr Mahama, accompanied by his wife, Mrs Lordina Mahama, also visited the Nyohini Children’s Home in the Tamale metropolis, where he donated bags of rice and groceries to support the upkeep of the children.

He explained that the rationale behind his decision to donate to the home was to share the joy of his birthday with the beneficiaries.

"This birthday has come at a time we are hot on the campaign trail and so I decided to take a little time off to come here with my wife, Lordina, to share the joy of my birthday with the children and continue with the campaign," he added.

He promised the management of the TTH that a next NDC government would put in more resources to expand facilities at the hospital.

In a related development, Mr Mahama has urged polling station officials of the NDC to be vigilant on election day to ensure transparency at the polling stations.

He was speaking during a courtesy call on the Regent of Nanung in the Nanumba Traditional Area, Nyeliboligu-Naa Yakubu Andani Dasana II, at his palace in Bimbilla in the Northern Region last Friday.

Mr Mahama also pledged his commitment to peaceful elections and assured the people and the international community of the desire of the party for a transparent electoral process.

With regard to the development of Nanung, he said the previous NDC government started a number of projects in the area but said they had all been abandoned by the current government.

He mentioned some of the projects as the extension of electricity, the expansion of the Bimbilla water system and the Eastern corridor road.

He further claimed that the four years of President Nana Addo Dankwa Akufo-Addo’s government had been characterised by hardships, lack of development projects and unemployment.

He, therefore, appealed to voters to bring the NDC back to power to continue with its people-centred projects to improve their lives.

"It is my hope and prayer that the people of this area will stand behind the NDC and vote it back to power to continue with its good works," he added.