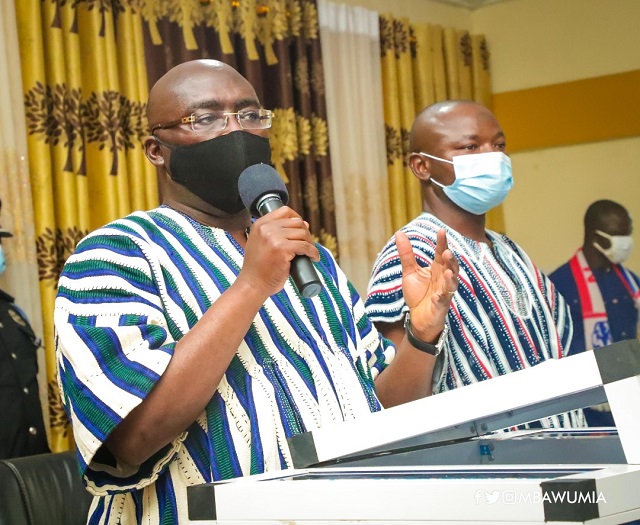 The Vice-President, Dr. Mahamudu Bawumia, has inaugurated a rural electrification project at Mangneigu and a 12-unit classroom block at the Yendi Senior High School (SHS), both in the Northern Region.

He said the electrification project had connected hundreds of households in the Mongneigu community in the Zabzugu District to the national grid, while the new classroom block at the Yendi SHS in the Yendi Municipality was going to help absorb the high number of students enrolled onto the government’s Free Senior High School programme.

Dr. Bawumia called on the people to renew the mandate of the governing New Patriotic Party (NPP) for a second-term in office.

On his campaign trip to Nakpali and Mongneigu communities in the Zabzugu District, the Vice-President said over the last four years the government had rolled out many policies and social intervention programmes that had brought about development and transformation to the areas.

In addition, he said the government’s flagship free SHS programme, Planting for Food and Jobs and One district-One-factory policies had created a lot of jobs for people in the Zabzugu District.

Furthermore, he said the extension of electricity to the Mongneigu community was in fulfilment of a promise he made to the people of Mongneigu during his campaign in 2016.

Dr. Bawumia assured students of the Yendi SHS that the government would grant students stress free loans when they entered tertiary institutions to aid them in their studies.

The Vice President also paid a courtesy call on the Overlord of Dagbon, Ya-Na Abukari II. The Ya-Na thanked the government for the many development initiatives in Dagbon and requested for a school bus for the Dabgon State Senior High School, also in Yendi.

The chief of Kworli Traditional Area in the Zabzugu District, Kworli-Naa Saaka Aminu, said that the lack of a senior high school in the area was contributing to the high illiteracy rate in the area, adding that it was slowing down the pace of development in the area.

"The absence of a senior high school in the area has aggravated the illiteracy situation in the area and hence the low level of development," he said.

Kworli-Naa Aminu further appealed to the President, Nana Akufo-Addo, to extend electricity to the neighbouring communities, adding that only five communities out of about 50 in the area were connected to the electricity grid.

He also appealed to the government to upgrade the Kworli health facility into a polyclinic and also fix the road linking Nakpali to Zabzugu so that farmers could transport their farm produce to nearby markets.