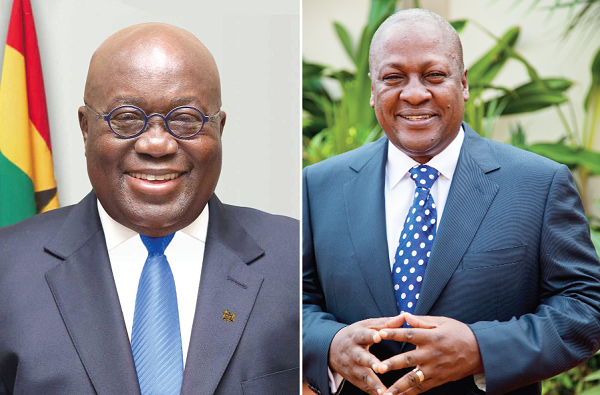 Battle lines drawn for 2020 Elections in Ghana: The presidential candidate of the NPP, President Nana Addo Dankwa Akufo-Addo (left) and that of the NDC, former President John Dramani Mahama,

Ghana’s seventh national polls in 2016 were hailed as a success, but a drop in voter turnout was a major feature of that election which has become a worry for political parties.

The 2016 election results indicated that nearly five million voters did not turn up to cast their ballots on Election Day, raising questions about voter interest in national elections.

That meant that out of the 15,712,499 registered voters on the register for that election, 10,931,071 voted, constituting a 68.62 per cent voter turnout, leaving close to five million voters not showing up to cast their ballots.

The parties have rekindled their campaigns after breaking for a week in honour of former President Jerry John Rawlings, who passed away on Thursday, November 12, this year.

From the perspective of the dominant opposition party, the NDC, they are set to galvanise the needed votes for victory in 2020.

The ruling NPP, however, is not leaving any stone unturned and is putting in every effort to increase its margin by over 1.5 million votes.

A review of the numbers shows that the 2016 elections recorded low numbers for the two major political parties, the NPP and the NDC, across all the regions, when compared with their performance in 2012.

The NDC was, however, the worst hit in 2016, recording net losses in all the 10 regions, while the NPP made modest gains across all the regions, except the Greater Accra.

A Deputy General Secretary of the NDC, Mr Peter Boamah Otukunor, said the process to spark the enthusiasm of the electorate to turn up on Election Day to vote for the party was already in motion and he expressed the confidence that the party would record improved numbers in the December 7 polls.

“This is evident by the turnout of party supporters at our campaign events and activities,” he said.

Mr Otukunor, who doubles as the deputy campaign manager of the party, said the NDC anticipated a huge margin of victory in the December polls, based on the grass-roots work that it had done and how the campaign was enjoying massive support from the electorate.

The NPP, for its part, expects its incumbency to reflect in electoral dividends for the party on December 7.

A Communications team member of the NPP, Nana Akomea, said he was confident that the policies of the government would boost the NPP’s chances in the upcoming elections.

He mentioned the free senior high school (SHS) policy, the industrialisation drive, the digitisation of the economy and the current road infrastructure as the key programmes that would impact on the electoral chances of the NPP.

“Our worry is not just about winning but also increasing the margin beyond the one million votes we had in 2019,” Nana Akomea, who is also the Managing Director of the STC, said.

A number of competing explanations can be put forward as accounting for the missing voters in 2016, particularly the close to one million votes that the NDC lost between 2012 and 2016.

A Senior Research Fellow and Head of Advocacy and Institutional Relations of the Institute of Democratic Governance (IDEG), Mr Kwesi Jonah, attributed the low voter turnout in 2016 to voter fatigue.

He said the electorate, after voting in six polls before 2016, had complained of lack of development dividend and so threatened to abstain from the elections, as they did not want to vote for other parties.

“It is up to the political parties to showcase their development programmes and what they have done in terms of development to ignite voter enthusiasm on Election Day,” he said.

Mr Jonah also charged the EC and the National Commission for Civic Education to intensify public education and awareness to rekindle voter enthusiasm.

But a Senior Lecturer at the Department of Political Sciences, University of Ghana, Dr Kwame Asah-Asante, said the political parties would succeed in encouraging their supporters to turn up on Election Day to cast their ballots if they were able to convince on how the victory of the party could transform their lives and standards of living.

"The parties should also help the National Commission for Civic Education and the EC to create the awareness and education to boost voter turnout," he said.

A former Senior Governance Advisor to the United Nations, Professor Baffour Agyemang-Duah, however, attributed the low turnout to voter apathy in NDC strongholds, the removal of ghost names from the voters register and the tightening of the electoral process.

“In other words, people had grown discontent with the political system and decided to withdraw their participation to register their fatigue and anxiety,” he told the Daily Graphic.

It was tempting to conclude that potential NDC voters just decided not to vote because they were dissatisfied with the performance of the government, he said.

At the same time, while they failed to vote massively for the NDC, they did not also vote for the NPP.

“This relates to two of the proposed explanations to the missing vote — either those voters genuinely existed but failed to vote in 2016 as a sign of dissatisfaction with the government's performance, or they were ‘ghosts’ or foreigners who could not find their way to the polling stations in 2016 due to the strengthening of the electoral processes,” he said.