Shun those who promote ethnic sentiments and divisions - Akufo-Addo 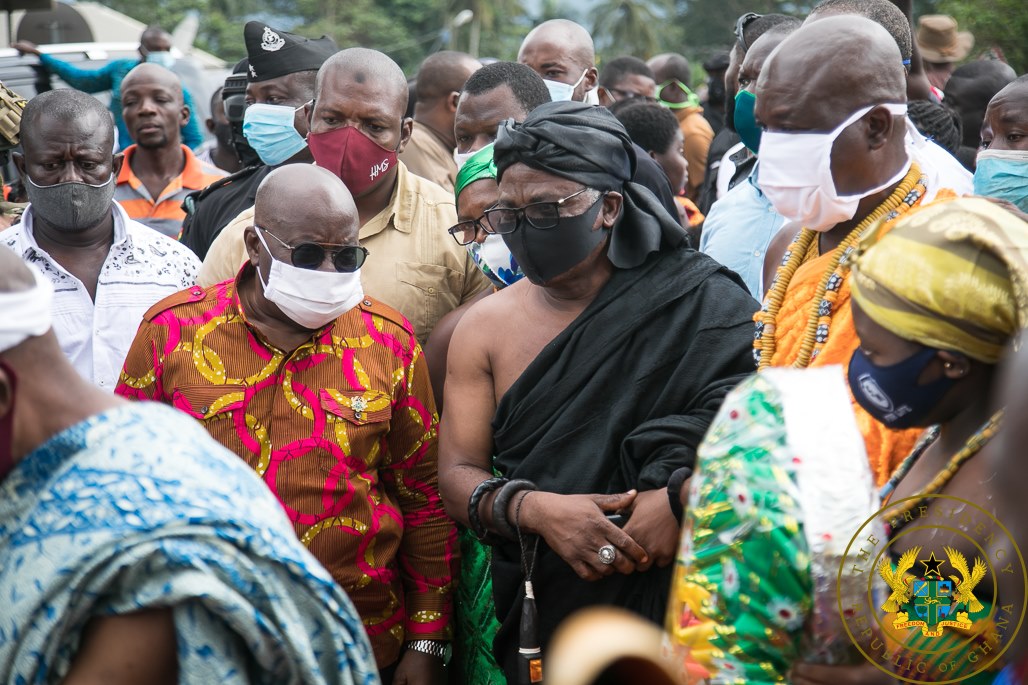 "No one who is committed to the Ghana Project, as I am, can have an ethnic agenda. Rather, we should shun all those who would promote ethnic sentiments and divisions amongst us for selfish, partisan, political ends," President Nana Addo Dankwa Akufo-Addo has said.

"There are people from this region [Volta], some of whom are well known to you here in Amedzofe, who serve in sensitive parts of my government and influence decisions on a daily basis. I may have my own failings, like we all do, but being a tribalist is not one of them," President Akufo-Addo added.

President Akufo-Addo said this on Tuesday, September 1, 2020, when he cut the sod for the commencement of construction works on Phase III of the Five Districts Water Supply Project in five Districts of the Volta Region.

Cutting the sod, at Adaklu-Anfoe, in the Adaklu District, President Akufo-Addo stated that Phase II of the Project will provide potable water to Central Tongu, North Tongu, Adaklu-Anyigbe, Agotime-Ziope and Ho West Districts.

“It is gratifying to note that this Project will provide potable water to eighty-nine thousand, one hundred and seven (89,107) people in one hundred and eighty-three (183) beneficiary communities, such as Dadoboe, Mawoekpor, Mafi Zongo, Mafi Kutime, Mafi Kumase, Avedo Bakpa, Kpoviadzi, Adidome, Kanikope, Bagalikope and Manase Zongo,” the President added.

With Phase III being financed by a concessionary credit facility from the Raiffeisenbank International of Vienna, Austria, to the tune of €11.5 million, he explained that, treated water to the 183 communities will be transported through 132 kilometres of transmission and distribution pipelines.

Other key components of this Project include installation of booster stations, elevated concrete tanks, health and hygiene education and environmental and social safeguards.

“Upon completion, this Project will result in an increase in water coverage for the Volta Region by some 5.6%. Furthermore, it is also expected to reduce the time spent in search for water, thereby, relieving, especially, women and children of this burden; minimise the affliction of water-borne diseases; and maximise the social and health benefits of clean, safe and reliable drinking water,” President Akufo-Addo said.

Government, he stressed, will continue to create an enabling environment, through the provision of social infrastructure, to attract investment to our rural communities.

“As a result, I expect that, with the availability of potable water in these communities, investors will take advantage of Government’s Flagship Programmes, such as “One- District, One-Factory”, to establish small and medium scale factories to exploit the natural resources of the area, create employment for the youth, and stimulate the growth and development of the local economy,” the President added.

President Akufo-Addo assured residents of Adaklu-Anfoe, and, indeed, residents of the 183 beneficiary communities that his Government would not relent in its efforts to increase access to water for all, a 2016 NPP Manifesto commitment, which remains a key priority.

“Whilst Government is committed to living up to its social responsibility, by providing social services like this water project to the people of Ghana, we expect beneficiary communities to contribute their quota towards ensuring the sustainability of these services, by helping to protect the infrastructure so they can last long,” he noted.

The President urged the Community Water and Sanitation Agency, the implementing Agency of the Project, to ensure timely completion of all detailed designs, and also to ensure that the project construction is carried out in accordance with required standards and specifications.

“I assure residents in this Region that Government has plans to increase further water coverage. Phase IV of this Project will be implemented soon for the benefit of communities in the remaining two districts, i.e. North Tongu and Ho West, through the same funding source,” he said.