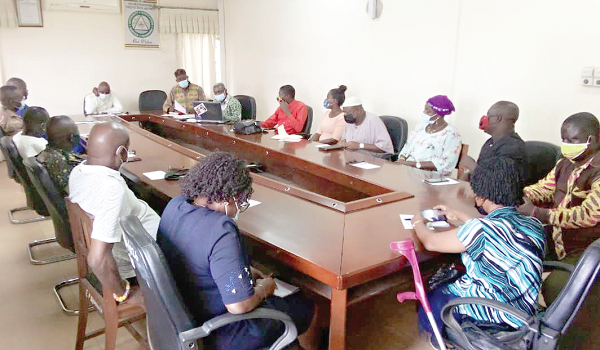 Members of the Bono Inter-Party Dialogue Committee at the meeting
30.5k Shares

Members of the Bono Regional Inter-Party Dialogue Committee (IPDC) have called on the government to provide the National Commission for Civic Education (NCCE) with the requisite resources to enable it to perform its task of continuous citizenship education.

The Committee also asked the NCCE to explore innovative ways of sourcing funding outside government's subvention to carry out its activities.

The committee acknowledged the enormous task of continuous citizenship education that the NCCE had to undertake on the country's electoral processes with limited resources.

These were contained in a communiqué issued after its meeting last Friday to assess the conduct of the 2020 general election in the region.

It was attended by representatives of political parties in the region, the Bono Regional Peace Council and the Security Services.

The committee, chaired by Rev. Monsignor Joseph Marfo-Gyimah, also expressed concern about the unregulated nature of political financing in the country.

It also called for measures to stop the use of state resources by incumbent political parties during electioneering.

It also said it was worried about vote buying and called on political parties to refrain from such conduct in order not to tarnish the reputation of the country's electoral system.

The committee called on the NCCE and the Regional Peace Council to follow up on the death of one person in the Banda Constituency in the heat of the electoral process last year.

Violent clashes between supporters of the New Patriotic Party (NPP) and the National Democratic Congress (NDC) at Banda Ahenkro in the Banda District in the Bono Region on July 13, 2020 resulted in the death of Silas Wulochamey, a teacher trainee from the Akim Oda Teacher Training College, with a number of people being injured and property destroyed.