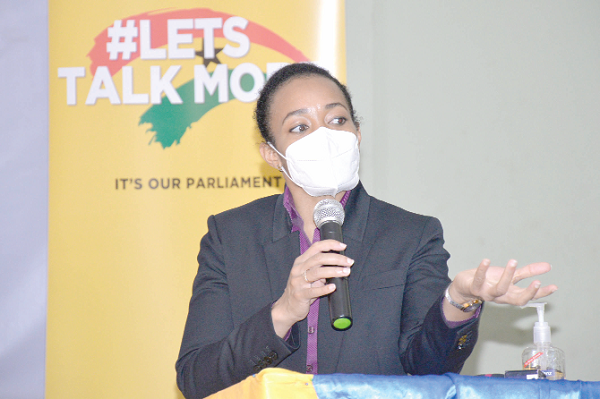 The Member of Parliament for Klottey Korle, Dr Zanetor Agyeman-Rawlings, has urged students to take keen interest in the proceedings of Parliament.

Speaking at the launch of the 10th anniversary of the students’ Parliament of the Accra Technical University last Friday, she urged the students not to restrict themselves to the proceedings and standing orders of the school’s Parliament but to be open minded to explore and learn from the country’s Parliament that they were replicating.

“As student parliamentarians, you are to have an open mind on the issues that happen in the country and be able to find ways to contribute to the discussions that go on in the main House. Do not limit yourselves to only what happens in your Parliament because your contribution here is a preparation towards your role as decision makers tomorrow,” she stated.

The anniversary is on the theme: “The Role of Student Parliaments in Nurturing Potential Leaders”.

Dr Agyeman-Rawlings also advised the students to select mentors and allow themselves to be guided on to the right path in life.

“Mentorship is a lifetime journey so in selecting a mentor, make sure the person shares your vision and has successfully walked on the path you want to walk on. Be ready to be submissive and learn from your mentors and expose yourselves to greater opportunities from your mentors”, she stated.

For his part, the Member of Parliament for North Tongu, Mr Samuel Okudzeto Ablakwa, urged the students to work in unity to fight for the welfare of all students not only in their institution but in other institutions.

“Student movements are no longer vibrant as we had in the early 1990s and 2000s because partisan politics has killed and divided student movements that were supposed to fight for the welfare of students in the country. It is your duty as student parliamentarians to avoid being manipulated by political party leaders and work in unity according to the vision of your founding fathers to fight for justice for all students not only in your institutions but in other institutions as well,” he stated.

Mr Ablakwa further advised the students to not only mimic the Parliament of Ghana in their proceedings but to also learn to get closer to the Members of Parliament in their various constituencies and learn the field work from them as that is the only way they can make their presence as student parliamentarians relevant.