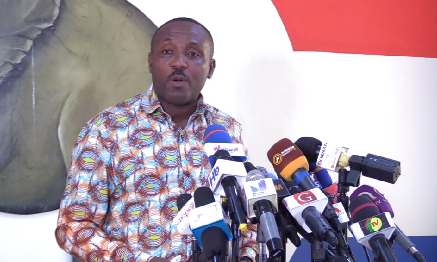 The New Patriotic Party (NPP) has called on former president and 2020 National Democratic Congress (NDC) flag bearer, Mr John Dramani Mahama to provide an alternative plan for the management of an economy hit by COVID-19.

The General Secretary of the NPP, Mr. John Boadu says that the former president must have some gratitude for the NPP government for rescuing a perishing economy he bequeathed Ghanaians instead of merely criticizing the government.

According to John Boadu who addressed a press conference at the party headquarters in Accra on Tuesday, to react to criticisms of the government by Mr Mahama, the government has successfully managed the COVID-19 situation and recorded a fast growing economy.

Mr Mahama on Monday, September 6, addressed a platform of the NDC on the state of the country’s economy and accused the government of hiding behind Covid-19 when they have mismanaged the economy.

However, Mr Boadu would do a better job by putting out an alternative plan to help address the country’s economic challenges and the COVID-19 situation instead of an open dialogue he has asked for.

“Indeed, what is John Mahama’s alternative to anything, apart from the IMF? If you are the alternative, then spell out your alternatives to the Ghanaian people now. He is asking for a dialogue on the economy. There are many forums available for such a dialogue but he needs to put forward his plan”, he said.

According to Mr Boadu, the assertions by Mr Mahama were false and that he is out of touch with post-COVID-19 governance.

Addressing the accusation of economic mismanagement, he said the country saw the worst economy under the NDC government led by President Mahama.

John Boadu said the intervention of the NPP government has led to a fast recovery of the country’s economy and financial sector.

“Former President Mahama actively oversaw the worst crisis ever to hit our financial sector and presided over the rot that, if not for the Akufo-Addo administration’s intervention, would have brought the whole financial sector on its knees. His negligence has cost over GHS21 billion of public resources to correct. Meanwhile, he turned judgement debt payments into a cottage industry”, he said.

Mr Boadu said that Ghana has been globally commended for successfully managing the Covid-19 pandemic and that the country is one of the fastest-growing economies during the pandemic.

“John Mahama’s lack of understanding of the Covid-19 economy is positively dangerous for Ghana because it badly skews his feeble attempts at analysis of our current economic situation. The IMF, to which he trumpets we should go to, has certified our economy as one of the fastest-growing in terms of Covid-19 economic rebound,” he said.