Nothing will change 2020 results — NPP 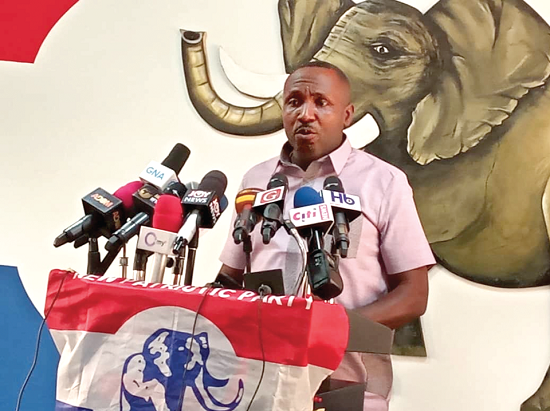 The ruling New Patriotic Party (NPP) has stated that nothing will change the outcome of the 2020 elections results.

It said the National Democratic Congress (NDC) had no case crying foul over the results declared by the Electoral Commission (EC), saying that the party should use the appropriate channels to seek redress.

Speaking at a press conference held at the party’s headquarters in Accra yesterday, the party’s General Secretary, Mr John Boadu, urged the NDC to put out its figures which made the party to think that it had won the 2020 elections.

He said it was surprising that members of the NDC were now crying that they had been cheated by the EC, knowing very well that the party lost the elections by a large margin.

He wondered how former President John Dramani Mahama would contest results of an election he had lost by more than 500,000 votes, saying, “no amount of whining can change the results.”

He said Mr Mahama had intentionally not conceded defeat in order to court the sympathy of the NDC supporters to retain him as the presidential candidate of the party for the 2024 elections.

He said Mr Mahama had from the outset declared his intention to reject the result of the election.

“He has impugned the integrity of the EC since the beginning of the year and signalled his unwillingness to accept the results of the poll. So, we all know that he is playing according to a script,” he stated.

Mr Boadu recalled that in 2016, Mr Mahama said it was elementary politics and an old trick for people who knew they were losing an election to seek to impugn the integrity of the EC.

“In 2012, we also felt cheated. Our presidential candidate, Nana Addo Dankwa Akufo-Addo, told his supporters that he didn’t want one drop of Ghanaian blood to be shed for him to be President. He said he would take his case to the courts. And he did exactly that.

“Even when the courts made a pronouncement and he disagreed with the verdict of the court, he accepted it with grace and dignity, and bounced back to win in 2016. We therefore urge Mahama to do the right thing by going to court,” he stated.

Mr Boadu said NPP as a party was ready to work with the NDC’s side in Parliament for the interest of the Ghanaian people.

“We shall work with the Minority for the interest of the country,” he noted, adding that the NPP has already begun its government and would not allow the whining of the NDC to distract its activities.