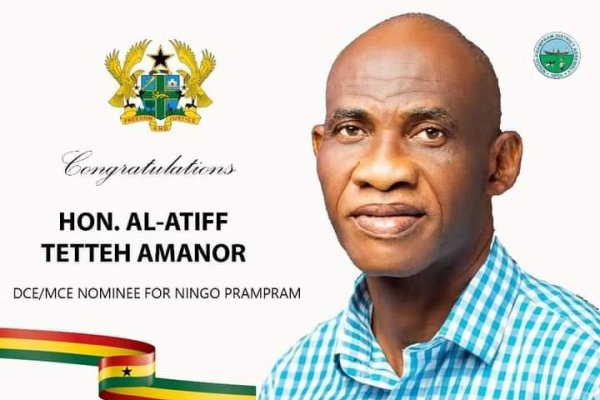 The Ningo-Prampram District Assembly has endorsed the President’s nominee for the position of District Chief Executive (DCE).

All the 32 assembly members voted to endorse Mr Al-Latif Tetteh Amanor as the DCE.

Speaking to the gathering after his endorsement, Mr Amanor expressed gratitude to the assembly members for the overwhelming endorsement.

He pledged to re-brand the district to compete favourably with other districts in the country.

He called on the people to put aside their political differences and prioritise the progress of Ningo-Prampram, an area enriched with numerous resources which could be harnessed to enhance the living conditions of residents.

Mr Amanor called for the support and co-operation of residents to enable him deliver on his mandate with the support of the assembly members.

In an interview with the Ghana News Agency, the Greater Accra Regional Chairman of the New Patriotic Party (NPP), Mr Divine Otu Agorhom, said the overwhelming confirmation of the DCE justified the confidence reposed in him by President Nana Addo Dankwa Akufo-Addo.

He said the Greater Accra Region would witness massive transformation in all facets of the national economy with a call on all stakeholders to support the agenda “Make Greater Accra Work Again” agenda.