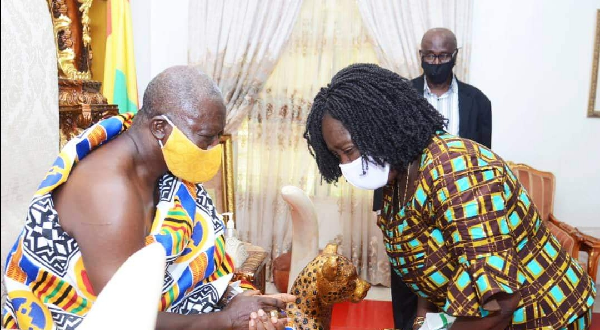 The running mate of the flag bearer of the opposition National Democratic Congress (NDC), Professor Naana Jane Opoku-Agyemang, has assured Muslims about the party’s commitment to develop Zongo communities when it is able to capture power in Election 2020.

She said the NDC as a party would never abandon Muslims after winning power since the party’s Election 2020 manifesto adequately addresses the needs and concerns of Zongo communities.

Prof. Opoku-Agyemang was addressing Muslim leaders at Asawase in the Asokore-Mampong Municipality as part of her six-day campaign tour of the Ashanti Region.

The NDC flag bearer running mate cited the provision of Muslim specific mortuaries for zongos as an example of the concerns of Muslims that the NDC intended to address when it came to power.

According to her, the mortuary issue had been trivialised by the ruling New Patriotic Party (NPP) but said the NDC was aware of its importance to the Muslim community.

She said the main objective of the mortuary for the zongo communities was to ensure that the dignity of deceased Muslims were preserved, and that bodies of Muslims were handled per the dictate of the religion.

Again, she said there was a provision for a fund for the development of the Muslim communities and also to grant soft loans to women in the zongo for businesses.

The President of the Federation of Muslim Women Association of Ghana (FOMWAG), Hajia Yasmin Appiedu, asked Zongo dwellers not to allow themselves to be used by any political party to foment violence for their parochial benefits.

She said while the parents could not stop their children from engaging or supporting political parties, she said it was their duty to ensure that they advised them to steer clear of violence.

Hajia Appiadu noted that the political parties only remembered the Zongos during election periods, and abandoned them after winning power only to return when it was time for another election.

She said it was high time that the parties took the welfare and the development issues of the Zongo communities seriously and helped to resolve them.

According to her, Zongos would not be used as pawns anymore, and that it was time for them to get their fair share of the national cake.

She, thus, appealed to Prof. Opoku-Agyemang to make the welfare issue of the Zongo communities, particularly that of the women, her concern and help to address them in the event the NDC won the elections.

Earlier, the NDC vice-presidential nominee called on the Asantehene, Otumfuo Osei Tutu II, to seek his blessing before undertaking her campaign tour of the region.

She was grateful to the Asantehene for his wise counsel when she first visited him after her nomination as the running mate.

She also paid a courtesy call on the Asantehemaa, Nana Konadu Yiadom III, who advised the political parties to conduct their campaign in a peaceful manner and not to indulge in violence.