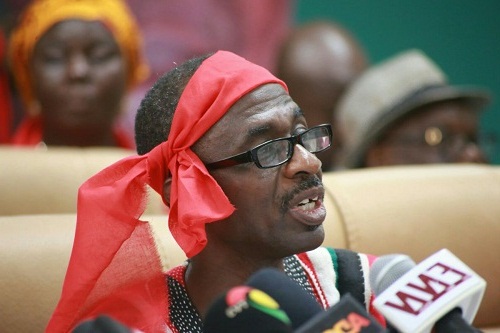 the issues being discussed are the qualifications of the chairman of the Audit Service, Prof Edward Dua Agyeman.

The press conference is being addressed by the General Secretary of the NDC, Johnson Asiedu Nketia.

Watch it live in the video below

According to the NDC, Prof Dua Agyeman "is a trickster" and had no reputation to fight corruption and that he had been recruited by the Akufo-Addo led New Patriotic Party (NPP) to work to tarnish the image of officials of the past NDC administration.

Addressing a press conference, the General Secretary of the NDC, Johnson Asiedu Nketiah, said Prof Dua Agyeman is a known NPP element who has over the years allowed himself to be used by the party to officials of NDC.

He said the so-called private audit firm that Prof Dua Agyeman is leading to audit state agencies and institutions is illegally contracted.

He said already has paid US$6.8 million to him, adding that UNDP also did not make any due diligence before involving itself in the exercise.

Asiedu Nketiah said Prof Dua Agyeman was banned in 1983 by the Institute of Chartered Accountants-Ghana from practicing either accountancy or auditing due to corrupt practices.

He added that he "is the only Auditor-General" in Ghana whose report has ever been rejected by Parliament.

He alleged that Prof Dua Agyeman has been recruited by the Akufo-Addo led to do a hatchet job to tarnish the image of past NDC officials.

He said Prof Dua Agyeman should be a subject of investigation instead of he investigating others.