Majority has no intention to remove Adwoa Safo — Annor-Dompreh 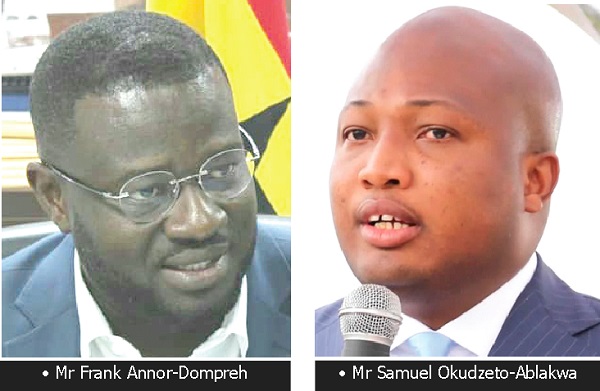 The Majority Chief Whip, Mr Frank Annor-Dompreh, has stated that the majority group in Parliament has no intention of filing a motion for the removal of the New Patriotic Party (NPP) Member of Parliament for Dome-Kwabenya, Sarah Adwoa Safo.

He said Ms Safo was still an integral part of the Majority and, therefore, denied that the Majority had triggered processes for her removal in Parliament.

Mr Annor-Dompreh in a telephone interview with the Daily Graphic yesterday said media reports and comments by minority MPs in that regard were wild guesses and had no basis.

Specifically, Mr Annor-Dompreh urged the MP for North Tongu, Mr Samuel Okudzeto-Ablakwa, to follow the laid down procedures of Parliament to ensure that his concerns about absentee MPs were put before the Privileges Committee of Parliament for action to be taken.

He said: “We haven't triggered a process for Adwoa Safo's removal. If we do, we understand the procedure and what our standing orders say and that is not lost on us as a majority but you can check the records. You can check the table office if it has to come by a motion. You can check the Speaker's Secretariat. We in the Majority side have not tended in any such move.

"I saw my friend Mr Ablakwa put up such a post but it is a wild guess because we have not done anything like that and I don't know what he was trying to pre-empt".

He suggested that if Mr Ablakwa had evidence of any MP breaching parliamentary statutes by absenting themselves for over 15 days without permission, it would be a much better strategy for him to surprise the Majority by filing a motion, rather than making publications on social media.

Mr Annor-Dompreh further disclosed that the government and Majority MPs had engaged and consulted widely to get the support of the public to ensure the passage of the bill.

The North Tongu MP in a separate interview with the Daily Graphic alleged that two MPs, namely the Assin Central MP, Kennedy Agyapong, and the Ayawaso Central MP, Henry Quartey, were both absent from Parliament for 18 days each, breaching the 15-day rule under Article 97 1C and Order 16 (1) of the standing orders.

He said he was concerned about the discriminatory application of the rules against Adwoa Safo who he said had been absent for 17 days, adding that he would in the coming days trigger processes for the referral of all three MPs to the Privileges Committee of Parliament.

He also claimed that Ms Safo was being discriminated against by the Majority because she was not making herself available for the E-Levy vote.