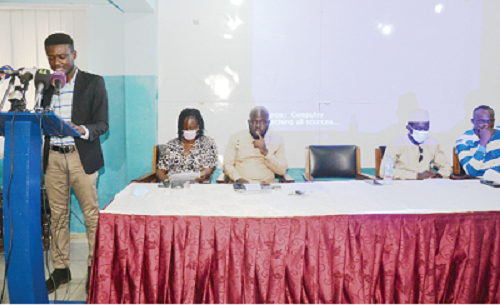 An advocacy organisation, Data and Advocacy Consult, has charged the Minister of Health, Mr Kwaku Agyeman-Manu, to remain focused in the execution of his work, especially in the fight against the COVID-19 pandemic.

That, it said, was to ensure the country overcame the havoc caused by the pandemic across the world.

“We are also by this statement encouraging the minister to be focused on the good job done so far because COVID-19 is still within our borders,” the acting Director of Data and Advocacy Consult, Mr Felix Asirifi, said at a press conference in Accra last Thursday.

He said the minister had been honest in submission to the Parliamentary Committee he appeared before recently, acknowledging that there was some issues regarding the procurement of vaccines for the country in the fight against COVID-19.

“We are, therefore, of the firm belief that the minister chose the health and safety of Ghanaians over procedural measures. We believe that the minister has been forthright with us as a country and has shown he is also human and could make mistakes,” he said.

Mr Asirifi noted that its call on the minister to be focused on his good works did not in anyway mean that “public officials should be encouraged to hide behind excuses to expend public funds without due diligence. However, we support any public official who is honest in his duty to the mandate given him.”

The acting director said data on worldometer.com today attested to the fact that Ghana stood up as one of the countries with one of the lowest infection and death rates per population and that such a feat was chalked with the immense contribution of Mr Agyeman-Manu, adding that the history of COVID-19 would never be written without the mention of the leadership of President Nana Akufo-Addo and Mr Agyeman-Manu.

Mr Asirifi said even in the face of being infected and being admitted in an intensive care unit, the minister showed leadership by surviving the disease and giving hope to those that had been affected.