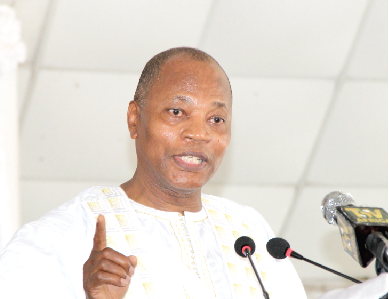 Curbing coups d'état in West Africa requires more proactive measures, including dialogue and mediation, a former Special Representative of the UN Secretary General and Head of the United Nations Office for West Africa and the Sahel (UNOWAS), Dr. Mohamed Ibn Chambas, has said.

According to him, the resurgence of military interventions “sends very bad signals” and had the potential to reverse the democratic process across the sub-region.

While expressing concern over the seeming public support for unconstitutional regime changes, as occurred in Mali and Guinea, he cautioned that such situations could complicate the enforcement of the democratic norms of good governance.

“To my mind, more proactive interventions that prevent constitutional crises and obviate the need for sanctions are a critical way out of such dilemmas. This, in turn, demands more proactive engagement, facilitated through dialogue and mediation,” Dr. Chambas said.

This was contained in virtual address he delivered at the opening of a regional policy workshop on: “Opportunities, challenges and best practices in building infrastructure for peace” in Freetown in Sierra Leone.

Organised by the Kofi Annan International Peacekeeping Training Centre (KAIPTC), with support from the Government of Denmark, the workshop was participated in by policy makers, experts and security actors who discussed measures to strengthen regional and national conflict prevention efforts.

Proposing measures to improve conflict mediation efforts in West Africa, Dr. Chambas said mediation mandates must be based on “contextualised scenarios that recognise and respond to the particularities of specific conflicts”.

Such mandates, he added, required flexibility in order to accommodate and respond to the diverse conflict situation in the region.

He also proposed the development of a roster of professional mediators with expertise in specific areas.

“There is an underlying assumption that suggests that the appointment of Heads of State of ECOWAS automatically equips a leader with the skills and competencies required for effective mediation, overlooking the fact that mediation is a challenging endeavour that requires training and professionalism.

“It sometimes raises questions about neutrality and the commitment of parties to the peace accords that are signed,” he added.

The Commandant of the KAIPTC, Major General Francis Ofori, expressed concern over the fact that over the years, attempts by ECOWAS member states to develop nationally owned and nationally led infrastructure for peace had produced “uneven results”.

While commending ECOWAS for demonstrating leadership by creating regional mechanisms for conflict prevention, he urged member states to leverage those mechanisms to establish an institutionalised approach to conflict transformation and building resilience.

The Danish Ambassador to Ghana, Mr. Tom Norring, also said the current development in the sub-region underscored the need for greater focus on conflict prevention and peaceful resolutions.

He urged countries in the sub-region to develop national frameworks on conflict prevention and also coordinate their actions because “violence and conflict show little respect for borders”.