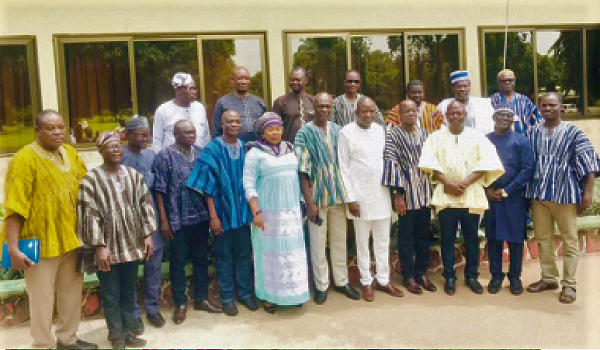 All the 16 Metropolitan, Municipal and District Chief Executives (MMDCEs) in the Northern Region, have been sworn into office to begin work in their respective jurisdictions.

They were sworn into office by the Magistrate of the Tamale District Court A, Mr Amadu Issifu, at a brief ceremony held at the Regional Coordinating Council (RCC) in Tamale last Wednesday, October 6, 2021, during which they swore the oaths of office and secrecy.

The Northern Regional Minister, Alhaji Shani Alhassan Shaibu, under whose auspices the swearing-in ceremony was held, urged the appointees to work hard to implement the development agenda of the government at the local level.

He also advised them to show respect to residents no matter their social status and also bear in mind that the same way they were appointed, they would be removed if they failed to justify the confidence repose in them by their respective assembly members, traditional authorities, opinion leaders and the people.

The confirmation exercise passed off smoothly in the region with some of the appointees scoring 100 per cent of the votes cast except in Yendi where the MCE, Alhaji Abubakar, who was retained by the President for a second term, had to wait for a second round of voting before he was confirmed.

Among those who have been retained for second term in office are Hajia Ayishetu Seidu, MCE for Savelugu; Mr Yakubu, MCE for Nanumba North; Mr Bingrini, DCE for Saboba; Mr Tatablata, DCE for Kpandai and Mr Fataw, DCE for Kumbungu.

Some of the assemblies in the region are sharply divided on partisan lines and the MMDCEs have to make some compromises during deliberations to get everybody on board for a smooth administration.

Another issue that the MMDCEs have to deal with is their relationship with party executive and members at the grassroots level to earn their respect and support. There have been occasions that some constituency executive members and members of the party have rallied against some MMDCEs and called for their removal from office on the allegations of working against the interest of the party.

Some residents who spoke to the Daily Graphic said they expected the new MMDCEs to tackle the issues of sanitation, bad roads, poor drainage system and provision of classroom blocks, health centres and potable water, especially in rural communities to improve the living conditions of the people.

Abdul Rauf, a resident of Sonayili, a suburb in the Sagnarigu Municipality, said he expected the new MCE for the area to address the issues of sanitation, bad roads leading to communities and the poor drainage system in the municipality.

Sherifa Mohammed, a trader at the Tamale Central Market, said she expected the new Tamale MCE to tackle the poor sanitation situation in parts of the central business district area.