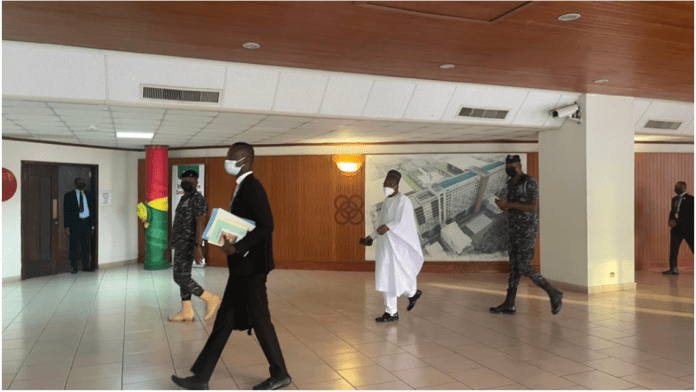 The Electronic Transfer Levy (E-Levy) Bill was expected to be taken through the various stages Friday evening (January 28) when Parliament reconvened, even though it had earlier been scheduled for next week Tuesday.

However, after sitting from 5pm to 7:10pm, with First Deputy Speaker, Mr Joe Osei Owusu presiding, the House decided that members were exhausted and therefore adjourned to Tuesday, February 1, 2022 without the E-levy showing up for a debate on Friday night as earlier envisaged.

The Minority had argued that the House was supposed to sit at 10 am on Friday, and later members were told sitting was going to start at 2 pm.

Mr Kwame Agboja argued that members were not told that there was going to be an extended sitting.

The Majority Leader, Mr Osei Kyei-Mensah-Bonsu had proposed a 40-minute break for rest when it was 6:45 pm, for members to return and continue with the E-levy. This was after the House had sat from 5pm and statements had been made on the passing of Captain (rtd) Kojo Tsikata, Brig-Gen Constance Emefa Edjeani-Afenu and the recent fire outbreak at Budumburam which killed a family of five that was trapped inside their building.

But the Minority side said members were exhausted.

The Minority Leader, Mr Haruna Iddrisu said he had difficulty with the E-levy coming up for discussion Friday night since they had earlier been told that the E-levy was next week and had cautioned they [Minority] didn't want "surprises."

He said there had been some engagements between the Minority Leadership and the Minister of Finance "but where we are... if we are introducing a new E-levy... we will refer it to the committee... then the committee can bring its report when Speaker Bagbin is back."

The Minority Chief Whip, Mr Mohammed Muntaka Mubarak said bringing the E-levy late Friday was an ambush, a position which was supported by the Minority Leader, Mr Haruna Iddrisu.

"It is actions such as this that aggravates the situation in this House... I believe we don't have to put the lobby discussions on the flow, let's take the statement and be able to adjourn," he said.

But after listening to the issue of members being exhausted, the Majority Leader, Mr Kyei-Mensah-Bonsu said he does not want to be blamed for making the House to sit for more hours when members were exhausted.

He said the Speaker [Bagbin] had earlier indicated to the leadership in the conclave that he was prepared to sit on the issue of E-levy if even it was going to take them up to 12 midnight.

The intention to bring the E-levy up for debate and possible vote on Friday evening followed a series of meetings held with the Minority leadership in Parliament Thursday and Friday, (Jan 28) by the Minister of Finance, Mr Ken Ofori-Atta which both ended without any significant progress.

In the same vein, the Speaker of Parliament, Mr Alban Bagbin is expected to travel by the weekend outside the country for a medical review in Dubai and it is not yet clear when he will return.

However there are suggestions that he could spend up to about a month before returning hence the decision for Parliament to reconvene later in the day to consider the E-Levy bill and possibly vote on it for its passage.

Reports however indicate that the Minister of Finance had proposed to reduce the rate of 1.75 percent on the E-levy to 1.50 percent but the Minority is still rejecting that proposal.

The Speaker, Mr Bagbin was seen in a video exiting the chamber and entering his vehicle to move out of the precincts of Parliament.

Watch the proceedings LIVE in the video attached below