Family of seven perish in fire disaster at Budumburam 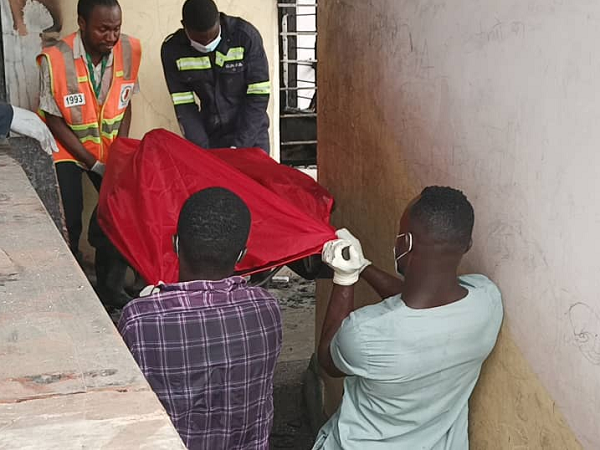 A family of seven have been burnt to death after fire swept through their residential property at Big Apple, a suburb of Gomoa Buduburam in the Gomoa East District in the Central Region Saturday morning.

The deceased are Mr Robert Assan, a headteacher, his wife, and their five children including a four-month-old baby.

According to some of the residents who were at the scene, the fire started around 5:30 am but could not tell what exactly could have triggered the fire which burnt the occupants to death.

Items such as personal effects, stationery, and food items were not spared as they were burnt beyond recognition.

A resident, Mr Isaiah Bentle in an interview with Graphic Online said they heard the victims screaming for help from their apartments, adding that he together with other residents who rushed to the scene tried to break into the apartment to rescue them but they were unsuccessful due to the nature of the inferno.

He added that by the time officials of the Ghana National Fire Service (GNFS) got to the scene, after receiving a distress call, it was too late to save the family.

He further stated that when the fire personnel and some residents entered the apartment, the lifeless bodies of the family were found in the bedroom and bathroom respectively.

Their bodies have since been deposited at the morgue awaiting the outcome of an autopsy.

The officer in charge of operations at the Gomoa Buduburam Station of the GNFS, ADO11 Mr Patrick Bawa, said that preliminary investigations revealed that the fire started from the living room before spreading to other rooms in the apartment.

He noted that the occupants had locked entrance to the building at the time of the incident which made it impossible for good Samaritans who rushed to the scene to save them, saying “it appears the occupants after seeing the fire tried to come out but the thick smoke made it difficult for them”.

He advised Ghanaians to have smoke detectors in their houses so that in situations like fire outbreaks, the detector would raise the alarm for occupants to know that there is a fire outbreak.

Many residents and sympathisers who rushed to the scene of the incident could not hold back their tears as they wept uncontrollably due to the tragic death of the headteacher and his immediate family members.