Council of State members cut their allowances by 20% 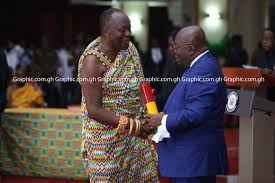 Council of State members cut their allowances by 20% Follow @Graphicgh

Members of the Council of State have agreed to a 20 percent cut in their monthly allowances for the next one year in support of efforts aimed at stabilising the economy.

This, the council said was in support of the 30 percent monthly salary reduction announced by the Executive.

According to the council, this is their widow's Mite in support of the total efforts towards the economic recovery move by the government.

The Chairman of the Council of State, Nana Otuo Siriboe II announced this Tuesday in his preliminary statement at a meeting with President Nana Addo Dankwa Akufo-Addo at the Jubilee House.

He expressed the hope that this small gesture would be emulated by other organs of state.

President Akufo-Addo expressed delight about the decision by the Council "to join the effort that we all have to make to downsize the  expenditure size of our public finances."

He added, "We intend to do it and I'm grateful for the act of solidarity on the part of the council for doing the same thing."

The members of the council moved into an in-camera meeting with President Akufo-Addo after the preliminary statements, reports Donald Ato Dapatem, Graphic Online's presidential correspondent.