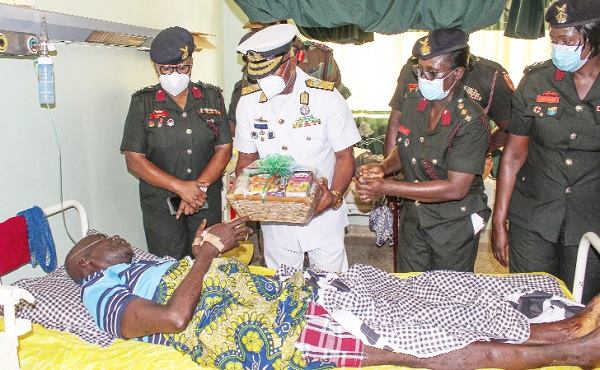 The Chief of the Defence Staff (CDS), Vice-Admiral Seth Amoama, has urged parties in all internal conflict areas to lay down their weapons and let peace reign for the good of the nation.

He stressed that conflicts only retarded the development of communities and the nation as a whole and that there would be no mayhem if the parties involved smoked the peace pipe.

Vice-Admiral Amoama gave the charge when he visited some members of the Ghana Armed Forces (GAF) who had sustained various injuries or suffered illness in the line of duty and were on admission at the 37 Military Hospital in Accra.

The CDS presented hampers of assorted items to the patients in the various wards, as the visit coincided with his birthday.

In all, about 13 patients were visited in various wards, such as the James Cole Ward, which is solely for Warrant Officers; the Opoku Ward, a female general ward; the Yaa Asantewaa Ward, dedicated to female officers and high-profile female personalities; the Maternity Ward; the Easmo Ward for accident victims; the Allied Ward for burns patients; the Anorf Ward for male high-profile persons and senior officers of the GAF and the Tamakloe Ward for general patients.

In an interview with journalists after the tour, Vice-Admiral Amoama urged personnel of the GAF on duty in conflict areas to discharge their duties professionally “and not take sides in the conflict.”

He said a number of soldiers had been deployed across various areas, along with the police, to maintain peace.

“The feedback I get from the field is that the morale of the troops at post is very high and they are going about their duties professionally,” the CDS stated.

Citing the ongoing conflict in Bawku, he said one military officer was in critical condition.

On arrival at the hospital, the CDS, who was accompanied by leading officers of the GAF, was received by the Officer Commanding the 37 Military Hospital, Brigadier General Azumah Bugri.

In each of the wards the CDS visited, it was obvious the patients did not expect a visit from a top official of the GAF, as they looked surprised.

During the tour of the wards, which lasted about an hour, the CDS interacted with all the patients he visited to know how long they had been on admission and how they were recuperating.

The patients received the gifts with open arms, after which Vice-Admiral Amoama informed them that the visit was to mark his birthday and to wish them speedy recovery.

He said the visit was also to show that the GAF took the health and welfare of their members seriously.

"This visit also indicates that we take issues of the health of personnel and officers of the GAF and their welfare very seriously," he said.

The CDS expressed the hope that the gesture would motivate them and facilitate their recovery process.

He wished them speedy recovery and encouraged them to work hard when they resumed work to safeguard the security of the citizenry.

The CDS also inspected the ongoing cardiothoracic centre project being sponsored by the businessman and Member of Parliament for Assin Central, Mr Kennedy Agyapong.

On January 29, last year, President Akufo-Addo appointed then Rear Admiral Amoama to act as the Chief of the Defence Staff, with effect from Friday, February 5, that year.

Prior to taking over, Rear Admiral Amoama was the Chief of the Naval Staff.

He has held numerous appointments in the GAF, both afloat and ashore, and he has some peacekeeping experience, having served as the UN Military Observer in Rwanda, the UN Liaison Officer in Lebanon and the UN Staff Officer on Sierra Leone.