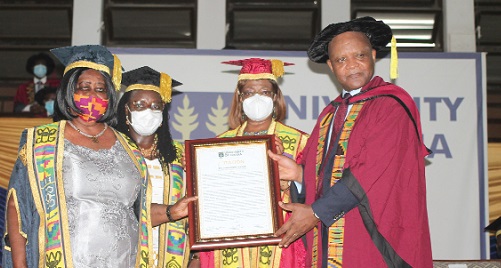 A renowned Public Health expert, Dr John Nkengasong, has called on African countries to start investing heavily in their respective public health institutions as part of measures to prepare the continent adequately to combat future pandemics.

Dr Nkengasong, who is the Director of the Centres for Disease Control and Prevention of the African Union (AU), stated that such measures should include developing a new public health order that would focus on the manufacture of medical supplies and vaccines, enhancing the capacities of the health workforce and institutions and increasing domestic financial investment.

That, he further explained, would enable Africa to effectively fight non-communicable, endemic and emerging global diseases such as the coronavirus (COVID-19), stressing that those three diseases were among the major challenges confronting public health delivery in Africa.

Dr Nkengasong made the call when he delivered a lecture on the topic: “Fighting the COVID-19 Pandemic: Africa at the crossroad?”, at the University of Ghana (UG), Legon in Accra last Friday.

The lecture was the 40th in the series of the Aggrey-Fraser-Guggisberg Memorial Lectures.

As part of the memorial lectures, an honorary degree was conferred on Dr Nkengasong.

Dignitaries at the event included the Chairperson of the University of Ghana Council, Justice Sophia A.B. Akuffo, who chaired the function; the Vice-Chancellor of the university, Prof. Nana Aba Appiah Amfo, and former vice-chancellors of the university, including Prof. Ivan Addae-Mensah and Prof. Ernest Aryeetey.

The health expert named non-communicable diseases to include high blood pressure, stroke, cancer, sickle cell, diabetes and cardiovascular diseases, while endemic diseases include malaria, HIV and AIDS and Tuberculosis, with the global diseases being Ebola and COVID-19.

“As a continent of about 1.3 billion people, we cannot afford to mortgage our public health security to the goodwill of our friends and others," he said, and cautioned that based on the global trend of pandemics, such as the Spanish flu that emerged in 1918, Ebola in 1976 and lately COVID-19, there was likely to be another pandemic, hence the need for Africa to prepare for it.

Dr Nkengasong noted that there was the need for Africa to develop a new public health order in which the sovereignty of Africa's public health would be upheld.

In that regard, he entreated countries in Africa to support and strengthen the new African Medicine Agency established by the AU to enhance service delivery in the health sector, saying that such an institution, if effectively operated, would serve as a regional body to certify all vaccines produced by African countries.

He said currently, Africa’s reliance on other countries to enable it to determine which vaccines were safe to use did not augur well for its “health sovereignty”.

“Africa must take ownership of its health autonomy by investing in health security commodities, so that we can have health sovereignty for the continent,” he said.

He revealed that as of now, Africa had been able to vaccinate only about 14 per cent of its population, for which reason it was imperative for the continent to develop vaccines to be able to achieve the World Health Organisation's (WHO’s) 70 per cent target by the close of the year.

“The continent was not able to translate the early discoveries made about the COVID-19 virus into developmental components of vaccine production, diagnostics and therapeutics,” he pointed out.

Dr Nkengasong explained that as a continent aspiring to be a continent for the future, and considering the population projections, by 2050 one in every four people in the world will be an African.

“Whereas the population in the rest of the world is flattening and decreasing, that of Africa will be skyrocketing, so we must do something now. But we are at the crossroads, and as a continent and as a people we must decide where to go from here," he observed.

Dr Nkengasong, who was appointed as one of the WHO Director-General’s Special Envoys on COVID-19 preparedness and response in early 2020, stated that the doctrine of fighting a pandemic such as the COVID-19 must be understood from five main perspectives, which he described as “the five Ps".

These, he said, were understanding the nature of pathogens the continent was dealing with, investing in understanding the behaviour of the population, the contextualisation of policies, the politics of the pandemic and effective action-oriented partnerships.

The expert pointed out that effective partnerships were developed in Africa after the pandemic was recorded on the continent, saying those partnerships were yielding the desired results and there was a commitment to produce at least 60 per cent of the vaccines in the world by 2040.

As a result of the partnerships, Dr Nkengasong noted, the Mastercard Foundation, for instance, supported the AU with over $1.5 billion to combat the pandemic in Africa.

The Chancellor of the UG, Mary Chinery-Hesse, extolled Dr Nkengasong’s qualities and excellent delivery and said he deserved recognition for his work in the fight against COVID-19 in Africa.

“The lecture has made us understand things better to put measures in place to fight future pandemics,” she observed.