Bahmed feels neglected by NPP following amputation of his leg 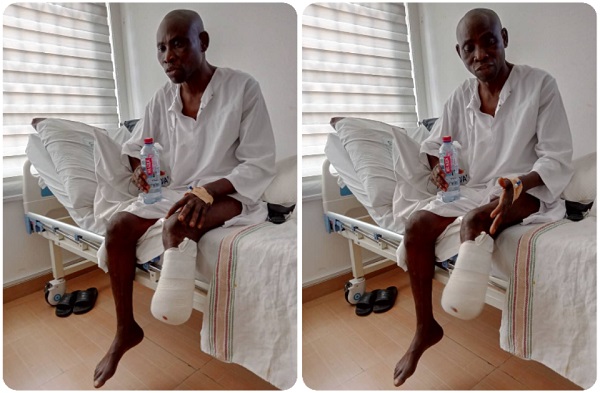 Alhaji Ahmed Bandoh alias Bahmed, a member of the New Patriotic Party (NPP) is beside himself with grief as a result of what he describes as neglect from his political party.

The Chief Executive Officer (CEO) of Bahmed Travel and Tours is currently on admission at the Police Hospital in Accra after his left leg was amputated.

According to the former Asante Kotoko board member, no member of the NPP has visited him at the hospital although some top officials of the party are aware of his current condition.

As to what led to his leg amputation, he said he had a cut while wearing his football boots and a few days later, it turned into a sore which got out of hand within weeks.

"I have been loyal to the NPP, and former President Kufuor will bear me witness. Jake Obetsebi Lamptey of blessed memory would have done same," a dejected Alhaji Bandoh said.

"No party member has been here to at least sympathise with me, but l can say on authority that l have paid my dues as far as this party is concerned".

"The youth should take a cue from what I am going through, with this kind of attitude towards people like me who have struggled and toiled for the party, l don't think they can break the 8 as they profess. The leadership of the party is heartless."