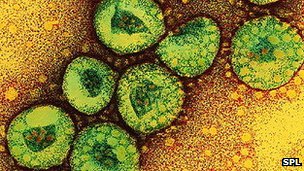 The World Health Organization says it appears likely that the novel coronavirus (NCoV) can be passed between people in close contact.

This comes after the French health ministry confirmed a second man had contracted the virus in a possible case of human-to-human transmission.

Two more people in Saudi Arabia are also reported to have died from the virus, according to health officials.

NCoV is known to cause pneumonia and sometimes kidney failure.


World Health Organization (WHO) officials have expressed concern over the clusters of cases of the new coronavirus strain and the potential for it to spread.

Since 2012, there have been 33 confirmed cases across Europe and the Middle East, with 18 deaths, according to a recent WHO update.

Cases have been detected in Saudi Arabia and Jordan and have spread to Germany, the UK and France.

"Of most concern... is the fact that the different clusters seen in multiple countries increasingly support the hypothesis that when there is close contact this novel coronavirus can transmit from person to person," the World Health Organization said on Sunday.

"This pattern of person-to-person transmission has remained limited to some small clusters and so far, there is no evidence to suggest the virus has the capacity to sustain generalised transmission in communities," the statement adds.

France's second confirmed case was a 50-year-old man who had shared a hospital room in Valenciennes, northern France, with a 65-year-old who fell ill with the virus after returning from Dubai.

"Positive results [for the virus] have been confirmed for both patients," the French health ministry said, adding that both men were being treated in isolation wards.

Meanwhile, the Saudi deputy minister of health said on Sunday that two more people had died from the coronavirus, bringing the number of fatalities to nine in the al-Ahsa governorate in the east of Saudi Arabia, Reuters news agency reports.

WHO officials have not yet confirmed the latest deaths.

In February, a patient died in a hospital in Birmingham, England, after three members of the same family became infected.

It is thought a family member had picked up the virus while travelling to the Middle East and Pakistan.

Novel coronavirus is from the same family of viruses as the one that caused an outbreak of Severe Acute Respiratory Syndrome (Sars) that emerged in Asia in 2003.

However, NCoV and Sars are distinct from each other, the WHO said in its statement on Sunday.

Coronavirus is known to cause respiratory infections in both humans and animals.

But it is not yet clear whether it is a mutation of an existing virus or an infection in animals that has made the jump to humans.