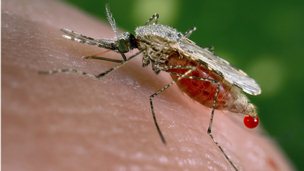 Researchers have found a strain of bacteria that can infect mosquitoes and make them resistant to the malaria parasite.

The study, in the journal Science, showed the parasite struggled to survive in infected mosquitoes.

Malaria is spread between people by the insects so it is hoped that giving mosquitoes malaria immunity could reduce human cases.

Experts said this was a first, distant prospect for malaria control.

Malaria is a major global disease. The World Health Organization estimates that 220 million people are infected annually and 660,000 die.

The study at Michigan State University in the US looked at the Wolbachia bacterium, which commonly infects insects.

It passes only from females to their offspring. In some insects the bug is exceptionally good at manipulating insects to boost the number of females for its own ends.

Wolbachia kills male embryos in some butterflies and ladybirds. In other situations, it can produce males that can breed only with infected females, and even allows some female wasps to give birth without mating.

Malaria-carrying Anopheles mosquitoes are not naturally plagued by Wolbachia, yet laboratory studies have shown that temporary infection made the insects immune to the malaria parasite.

The challenge was to turn a temporary infection into one that would be passed on. The research team found a strain of Wolbachia that could persist in one species of mosquito, Anopheles stephensi, for the entire length of the study - 34 generations.

Malaria parasites found it difficult to cope in these mosquitoes, with parasite levels fourfold lower than in uninfected bugs.

Research in Australia has shown that a different strain of Wolbachia can prevent the spread of dengue fever by mosquitoes. That research is more advanced and has been shown to work in large trials in the wild.

Dr Anthony Fauci, director of the National Institute of Allergy and Infectious Diseases in the US, said this study was a proof of concept that the same could be done for malaria.

"If you can get it to survive and proliferate in the environment of mosquitoes in malaria-stricken areas, this could conceivably have an important impact on the control of malaria.

"I think the potential for this is very important. The implementation will be the challenge."

Commenting on the study, Prof David Conway, of the London School of Hygiene & Tropical Medicine, said: "It is interesting and is the first report of Wolbachia clearly replicating, but a number of things took away the punch."

Also he cautioned that it was in just one species, Anopheles stephensi, which carries malaria in the Middle East and South Asia. Anopheles gambiae, in Africa, is a bigger problem.

One of the researchers, Dr Zhiyong Xi, told the BBC: "We have done only one strain. If we target Anopheles gambiae we would need to apply the same technique again."

He added that if it could be shown to work then "the Wolbachia tool can complement currently available tools", such as mosquito nets and medication.