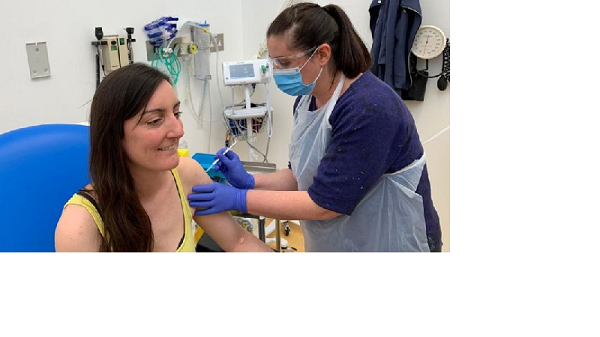 Elisa Granato was one of the volunteers given the Oxford vaccine
30.5k Shares

The Oxford coronavirus vaccine shows a strong immune response in adults in their 60s and 70s, raising hopes that it can protect age groups most at risk from the virus.

They are also testing whether the vaccine stops people developing Covid-19 in larger, phase three trials.

Early results from this crucial stage are expected in the coming weeks.

Three vaccines - Pfizer-BioNTech, Sputnik and Moderna - have already reported good preliminary data from phase three trials, with one suggesting 94% of over-65s could be protected from Covid-19.

The Oxford data is from an earlier stage, which tests the safety of the vaccine and the body's response to it, but in the long run it's likely this vaccine could be easier to roll out because it doesn't need to be stored at very cold temperatures.

The UK government has ordered more of the Oxford vaccine, manufactured by AstraZeneca, than any other - 100 million doses - compared to 40 million doses of the Pfizer-BioNTech vaccine and five million of the Moderna vaccine.

Prof Andrew Pollard, study lead from the University of Oxford, told the BBC he was "absolutely delighted with the results" showing a strong immune response "even in those over 70 years of age".

On whether the vaccine protects people against Covid-19, he said they were "not there yet" but the data would probably be released "before Christmas".

Prof Pollard said there was "no competition" with other vaccines, adding that multiple vaccines needed to be successful.

"We will need all of them to protect people around the globe," he said.

The challenge with developing a Covid vaccine is to trigger the body to fight back against the virus no matter how old someone is.

Older people's weaker immune systems mean vaccines do not tend to function as well as they do in younger people.

These trial results from the University of Oxford, peer-reviewed in the Lancet, suggest that may not be a problem.

Dr Maheshi Ramasamy, an investigator at the Oxford Vaccine Group, said: "The next step will be to see if this translates into protection from the disease itself."

Two weeks after the second dose, more than 99% of participants had neutralising antibody responses. These included people of all ages.

The T-cell response - another measure of how well the immune system responds - peaked two weeks after the first dose of the vaccine regardless of age.

"The robust antibody and T-cell responses seen in older people in our study are encouraging," Dr Ramasamy said.

"The populations at greatest risk of serious Covid-19 disease include people with existing health conditions and older adults.

"We hope that this means our vaccine will help to protect some of the most vulnerable people in society, but further research will be needed before we can be sure."

Older adults were also less likely to experience side-effects, which were usually mild.

And there were no serious safety issues relating to the vaccine, called ChAdOx1 nCov-2019.

Volunteers in the trial were put into groups and given one or two doses of the vaccine or a dummy jab.

The reaction of their immune systems was assessed on the day they got the jab, then one, two and four weeks after both doses.

The Oxford vaccine is made from a weakened version of a common cold virus (known as an adenovirus) from chimpanzees that has been modified so it cannot grow in humans.

Work began on the vaccine in January and it was developed in under three months, starting human trials - the first in Europe - in April in Oxford.

Phase three trials of the vaccine, which look at how effective it is at protecting people against the Covid-19, started at the end of August and are still continuing.

When data from this stage is sent to the regulators, scrutinised and approved, the vaccine can be given the green light to be used on people worldwide.

The Oxford vaccine is expected to be easier to manufacture on a global scale than Pfizer and Moderna's vaccine, and the university is committed to making hundreds of millions of doses available to the developing world.

The UK's large order of the vaccine means that if it is approved before Christmas and becomes available early next year, it would make a major difference to how quickly Covid vaccines could be given to people in priority groups.