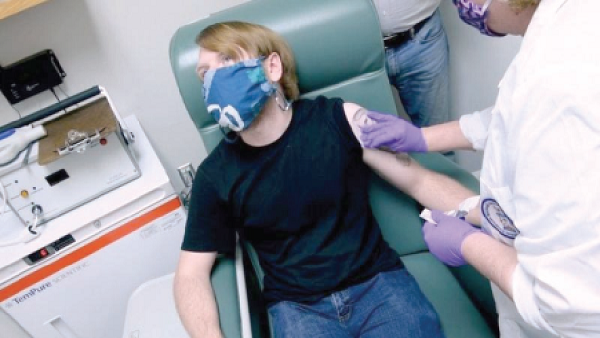 A vaccine trial participant being injected in Baltimore in May
30.5k Shares

The world is sighing with relief at the announcement of the successful trials of COVID-19 vaccines.

Through a partnership between Pfizer and BioNtech as well as Moderna, the announcement is giving hope to a world devastated by the virus for almost a year.

The COVID-19 pandemic has no doubt slowed down the global economic growth and it is refreshing that at last, things will change for the better.

The Oxford coronavirus vaccine has also shown an "encouraging" immune response in adults in their 60s and 70s while others are in development, a third major trial — from Belgian company Janssen — is under way in the UK.

Notwithstanding, the vast majority of people are still vulnerable to COVID-19 infection and it's only the restrictions on lives that are preventing more people from dying.

But a vaccine will safely teach our bodies to fight the infection, stop us from catching the coronavirus in the first place or at least make COVID-19 less deadly.

Having a vaccine, alongside better treatments, is the surest exit strategy and hopefully Pfizer/BioNtech, the first pharmaceutical company to share information from the final stages of vaccine testing, may offer the world the breakthrough. Data suggests the jab could prevent more than 90 per cent of people from getting COVID-19.

About 43,000 people have been given the vaccine, and no safety concerns have been raised while Moderna has ran a trial of its vaccine on 30,000 people in the US in which half were given dummy injections.

It also said its vaccine protected 94.5 per cent of people, after only five of the first 95 trial participants, who developed COVID-19 symptoms, had received the real vaccine.

Trial results from the vaccine being developed by British drug manufacturer, AstraZeneca, and scientists at the University of Oxford have been said to be "encouraging". A strong immune response was seen in adults in their 60s and 70s. The team is now staging bigger trials to see if the vaccine stops people from developing COVID-19.

Meanwhile, promising data on a Russian vaccine called Sputnik V has also been released and based on interim results from a phase 3 trial, the same stage reached by the Pfizer jab, Russian researchers report that it is 92 per cent efficient.
More results from other teams working on advanced trials are also expected in the coming weeks and months.

The Janssen trial has started the job of recruiting 6,000 people across the UK. Other countries will join the effort to bring the total up to 30,000.

The company already has one large-scale trial of its vaccine in which volunteers receive one dose. This work will see if two jabs give stronger and longer-lasting immunity.
Several other vaccines are in the final stages of testing, including Wuhan Institute of Biological Products and Sinopharm in China, and Russia's Gamaleya Research Institute.

Meanwhile, COVID-19 cases keep rising worldwide with the United States still leading in deaths and infections but according to a tally by the African Union (AU), COVID-19 cases in Africa had crossed the two million mark with 2,013,388 cases reported yesterday, the continent represents less than four per cent of the world’s total cases.

They believe many COVID-19 infections and related deaths in Africa are likely being missed as testing rates in the continent of about 1.3 billion people are among the lowest in the world, and many deaths of all types go unrecorded and Africa has reported less than 48,000 coronavirus deaths so far.

Countries such as Sudan, Chad, and Egypt have reported the highest death rates across the continent at 7.81 per cent, 6.28 per cent and 5.82 per cent respectively.

South Africa has the continent’s highest number of reported COVID-19 cases at less than 750,000, with a death rate of 2.71 per cent, according to a Reuters tally.

With the continent representing nearly 16.7 per cent of the world’s population, about 15 coronavirus cases are reported for every 10,000 people.

Africa’s low number of infections and deaths compared with Europe, South America and the United States can in part be attributed to several factors aside from a likely undercount.

The risk of developing severe COVID-19 increases with age, so the continent’s relatively youthful population is likely contributing to a lower overall death rate, experts say.

More than 250,000 Americans have now died from coronavirus, making it the highest death toll anywhere in the world. The country has now reported 250,029 deaths and nearly 11.5 million cases, according to Johns Hopkins University.

Italy was the first country hit during Europe’s initial COVID-19 wave and it’s seen another 753 deaths in the last 24 hours to last night. The eastern region of Abruzzo has decided to become a “red zone”, joining seven other areas with maximum restrictions.

Austria’s nursing homes have been badly affected by the second wave of the pandemic. In the 40 days up to 12 November, 323 deaths have been recorded — more than half of the country’s 607 fatalities in that time.

Strict COVID-19 measures in the Netherlands that came into force two weeks ago have been relaxed, so museums and swimming pools are reopening today and up to 100 people can now attend funerals.

Cases in Germany have gone up 22,609 in the past 24 hours, close to last week’s peak. The public health agency has appealed to Germans to follow hygiene and distancing measures.

Belgian Prime Minister, Alexander De Croo, has warned of a Christmas like no other before it. “The last thing we want is a Christmas wave.”