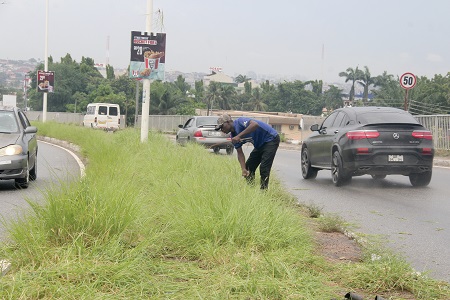 A median area in Accra being cleared Follow @Graphicgh

Weedy medians in the central business districts across the country will be cleared every two months, the Department of Urban Roads has assured.

The department said instead of carrying out the activity every four months, the medians would now be cleared every two months so that they did not overgrow.

"We plan to do it every two months now so that it does not get out of hand," the Accra Regional Director of the Department of Urban Roads, Adwoa Duku, told the Daily Graphic.

The medians along the Mallam-Kasoa Highway and the Mahama Road are among areas being cleared of weeds currently, while at Panbros, Weija Junction, White Cross and Brigade, excavators have been used to tidy up the medians.

A month ago, some medians overgrown with weeds in Accra were cleared upon a Daily Graphic report on Friday, June 3, 2022.

It said the grass, meant to be well maintained to beautify the landscape, had become an eyesore on most of the dual carriage roads.

The weeds posed danger to pedestrians and drivers, as they blocked the view of road users from the opposite direction.

The situation was worse with drivers doing U-turns though they are unable to see vehicles coming from the opposite direction.

Ms Duku confirmed that the clearing of the median of weeds had begun and that the work would be stepped up in order to tidy the roads, citing some ongoing works around the Danquah Circle area to the Nyaniba Estate as an example.

“We will step up the exercise because we know the implications of a weedy median, what it has to do with pedestrians as it obstructs their view because they are unable to see oncoming vehicles. Drivers are also not able to tackle obstacles along the way properly, so it is of great importance to the department to make sure all medians are cleared,” she said.

“Yes, they have overgrown, but we will make sure that they are all cleared in time,” she added, saying that there were contractors that were in charge of the exercise and engineers who went round to undertake supervision.

She said work being done now was part of the department’s routine maintenance, and that her outfit was not sleeping on the job. She gave an assurance that all the medians would be cleared to ensure road safety.