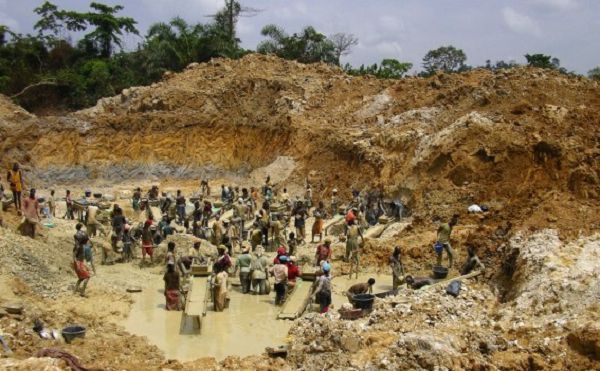 President Nana Addo Dankwa Akufo-Addo has called for an open and dispassionate conversation about illegal mining and its future.

He said the devastating nature of illegal mining required from leaders the duty to take the subject out of the party-political arena and engage in an honest conversation about the menace for the sake of current and future generations.

“Should we allow or should we not allow galamsey, the illegal mining that leads to the pollution of our water bodies and the devastation of our landscape? As I have said often, the Almighty having blessed us with considerable deposits of precious minerals, there would always be mining in Ghana,” he observed.

President Akufo-Addo made the call when he delivered a message on the state of the nation yesterday prior to the dissolution of the Seventh Parliament at midnight today. He will be sworn in for a second term at the same venue tomorrow.

Other dignitaries who graced the occasion aside from the Members of Parliament (MPs) from both sides of the divide included the First Lady, Mrs Rebecca Akufo-Addo, the Vice-President, Dr Alhaji Mahamudu Bawumia, and his wife Samira, former President J. A. Kufuor and some members of the Council of State.

The less than two-hour ceremony also attracted sitting and former ministers of state, former MPs, leaders of some political parties, members of the diplomatic corps, traditional rulers, service commanders and the clergy.

Before he commenced his speech, President Akufo-Addo asked the gathering in a large tent erected at the precincts of Parliament to stand up for a minute’s silence in memory of former President Jerry John Rawlings, who passed away on November 12, last year.

On assumption of office in 2017, President Akufo-Addo commenced an action that reduced the activities of illegal mining (galamsey) following an aggressive media campaign.

A task force, made up of joint military and police personnel, was formed that moved to affected areas, seized equipment including excavators, and prosecuted those arrested for engaging in illegal mining.

The action led to a reduction in illegal mining activities and the destruction of the environment and water bodies but it also contributed to the governing New Patriotic Party (NPP) losing most of the seats it held in the mining communities.

Although the government had commenced a sustainable means of mining which is termed Community Mining Programme, the presidential candidate of the NDC, Mr John Dramani Mahama, during the electioneering, promised to release all those incarcerated by the law courts for engaging in illegal mining.

Touching on the need for dialogue in the address to Parliament, President Akufo-Addo said there had always been mining in the country but the problem had been the absence of modern technology, a situation that had led to resort to illegal mining methods which posed serious dangers to water bodies and the environment.

He explained that the pollution of the rivers and water resources had been so acute that the Ghana Water Company Ltd was unable to afford the processing of water for safe drinking and stressed: “We have to talk about galamsey.

We, who are leaders, owe it to the country to take the subject out of the party-political arena, and have an honest conversation about this menace to our future.”

President Akufo-Addo expressed gratitude to God and Ghanaians for giving him another four years, a clear mandate and opportunity to complete tasks, consolidate some of the far-reaching measures “we have introduced, and initiate further changes and adjustments to policies and practices.”