US medical team operates on 12 children at KATH 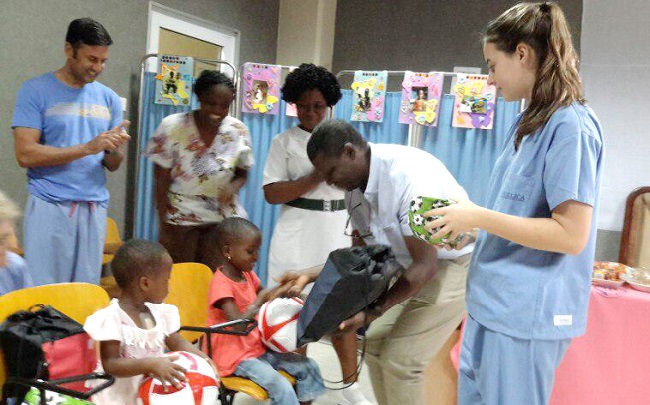 Dr John Adabie Appiah (second right) distributing some items to some of the children whose hearts defects were corrected free of charge. Looking on are some members of the medical team

A medical team from the Boston Children’s Hospital in the USA has carried out free surgeries on 12 children at the Komfo Anokye Teaching Hospital (KATH) in Kumasi to correct heart defects.

Each of the beneficiaries would have paid at least GH¢40,000 as the cost of the surgery.

Some of the patients have since been discharged, while those still on admission are doing well.

The team also donated medical equipment, valued at $75,000, to the Paediatric Intensive Care Unit (PICU) of the hospital.

Briefing the media after the surgeries had been performed last Friday, the Head of the PICU of KATH, Dr John Adabie Appiah, who also hosted the Boston medical team, commended the team for continuously assisting the hospital with expertise and equipment for the past nine years.

He expressed regret that the PICU had lost some children because of the absence of some of the equipment donated by the team, which included five mechanical ventilators which could be used for even day olds, four pulse oximetres, five electrocardiogram machines, two monitors and numerous boxes of disposables.

He stressed that the machines had come in handy.

Dr Appiah said it cost between GH¢3,500 and GH¢20,000 to take care of critically ill children at the PICU, saying that to ensure that all children, irrespective of the financial strength of their parents, receive quality care, the doctors and nurses have set up a foundation, the Little Steps Foundation, to assist the patients.

He appealed to corporate entities, religious bodies and individuals to donate to the foundation to help care for critically ill children.

Dr Appiah said the eight-bed PICU could be expanded if work on the Mother and Child building was completed and appealed to the government to ensure that work was completed on the building.