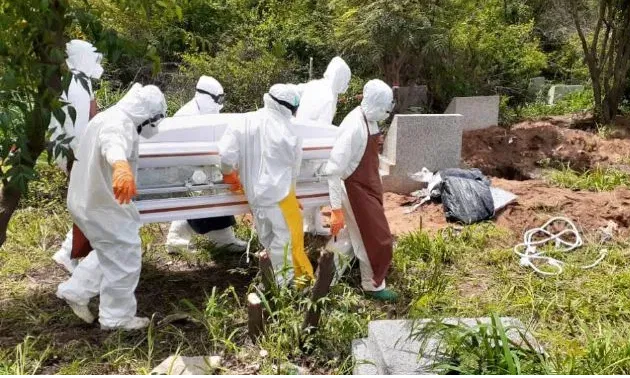 Three COVID-19 related deaths have been recorded in two municipalities in the Upper East Region this year.

Two of the deaths were captured in the region's COVID-19 Situational Report of January 14, 2021 while the other death occurred last Friday, January 15, 2021 and is expected to be captured in the next report this week.

The report indicated that two of the deaths - a 63-year-old woman and a 55-year -old man -  were recorded in the Bolgatanga and Kassena Nankana Municipalities, while the third victim, a man in his 30s, was a General Nurse at the Paediatric Unit of the Navrongo War Memorial Hospital who passed on at the Regional Hospital at Bolgatanga last Friday.

According to the report, compiled by the Regional Director of the Ghana Health Service (GHS), Dr Emmanuel K. Dzotsi, and his team, two of the cases were “suspected at the Out Patients Department and they died shortly during the triaging process”.

The triaging process involves a quick examination of patients for medical treatment.

Fifteen of the active cases are currently on admission at the treatment centre at the Regional Hospital while the rest are being managed at home.

The report further stated that the cumulative case count for the region was now 512, with 10 deaths.

It said the Bawku and Kassena Nankana municipalities recorded two deaths each, while the Bolgatanga Municipality and Bongo District recorded five and one case respectively.

The report identified a number of challenges to curbing the infection rate among residents of the region to include poor adherence to COVID-19 protocols among the public, including health workers;, ineffective triaging in health facilities and the national recall of the tablets used for contact tracing, and the lack of access to archived records by district officers as well as irregular and incomplete reporting by some districts.

The report tasked all districts to identify and establish treatment centres in district hospitals to manage asymptomatic cases and mild COVID-19 cases.

Besides, there was the need to intensify risk communication by delivering COVID-19 messages in churches, mosques, schools, markets, lorry parks and other public places.

It added that health personnel needed to be re-oriented on the need to fully comply with COVID-19 protocols and step up index of suspicion.

Furthermore, the intensification of triaging in health facilities for early case detection and isolation was required while identification and follow up on all contacts should be done religiously.

The report stressed the need for the public to adhere to COVID-19 prevention protocols by always wearing nose masks, practising regular handwashing with soap under running water or using hand sanitisers as well as ensuring physical distancing.

It further advised any person with fever and cough to report to the nearest health facility.

The Regional Chairman of the Ghana Registered Nurses and Midwives Association (GRNMA ), Mr Thomas Lambon, confirmed to the Daily Graphic yesterday, Sunday, January 17, 2021 that one of the GRNMA members passed on after succumbing to the virus at the Regional Hospital in Bolgatanga last Friday.

“It is a sad situation for the GRNMA and a big loss to the association but I want all members to remain calm and step up efforts to observe all the necessary protocols,” Mr Lambon lamented.

He further expressed regret at the manner in which health personnel and members of the public seemed to have relaxed in the adherence to the COVID-19 health protocols.

That, he explained, contributed to the increases in the cases in the entire country.

Mr Lambon, therefore, called on the Ghana Health Service and the government to beef up the distribution of Personal Protective Equipment (PPEs) and other materials to curb the spread of the pandemic.