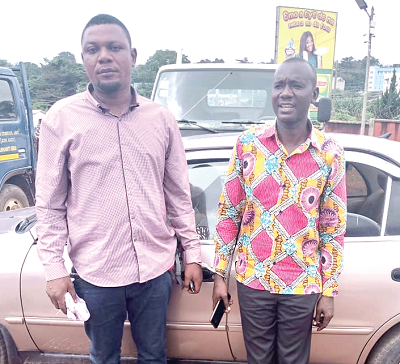 The Revenue Protection Team of the Electricity Company of Ghana (ECG) has caused the police arrest of two fake members of staff of the company who were extorting money from some customers of the company.

The two were arrested at Sawaba in the Asokore-Mampong municipality upon a tip-off while trying to extort money from customers who were alleged to be engaged in illegal connections.

The suspects are Daniel Kofi Amankwah and Richard Addai.

Amankwah had on him the ID card of a third-party contractor of the ECG, Dreamtech Vent.

The suspects also had in their possession a summons letter which they had co-signed inviting the customer in the alleged illegal connection to the offices of the ECG.

Briefing the Daily Graphic, the Revenue Protection Manager of the Ashanti Regional Strategic Business Unit of the ECG, Mr Ishmael Oklu, said Amankwah had been on the wanted list of the company for a while for engaging in dubious activities, including extortion of money from customers.

Last Friday, August 20, he said, luck eluded Amankwah when he and his accomplice went to a house at Sawaba where they tried to extort money from a customer while presenting themselves as workers of the ECG.

Mr Oklu said upon a tip-off, the team zeroed in on the suspects and arrested them.

He said the suspects usually visited the homes of clients and demanded to check their meters for illegal connections.

According to him, when they found people who had illegally connected power, they issued them with summons letters and threatened them with arrest.

He said some of the customers negotiated with the suspects and paid money to them to allow the cheating ECG customers to go scot-free.

Mr Oklu said those fake staff gave the ECG a bad name and made people believe that “that’s how the staff of the company operate.”

He said their acts were also making the work of ECG workers, particularly those at Revenue Protection Unit, very difficult, as some customers even refused them entry into their houses “because they think we are coming to extort money from them.”

According to him, whenever a customer was found to have illegally connected power, “the person is billed and made to pay for the power stolen, with penalty, and also prosecuted to serve as a deterrent to others.”