Tension at Ghana Bauxite Company as strategic investor pulls out 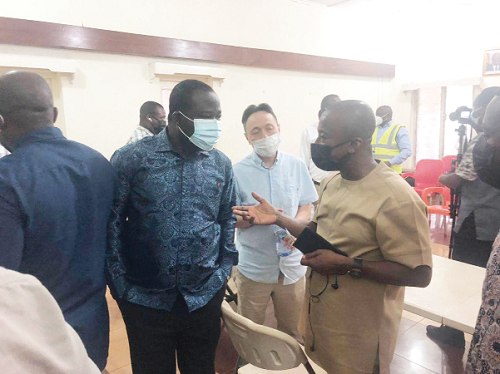 Mr Isaac Ofori-Poku (right ), Board Chairman of the GBC, having a discussion with Mr Alfred Obeng-Boateng (left), the MP for the area, and Mr J.K. Fang, the General Manager of the GBC, after the crisis meeting

Tension and anxiety is brewing at the Ghana Bauxite Company (GBC) Limited at Awaso in the Bibiani-Anhwiaso-Bekwai District in the Western North Region following the decision by the strategic investor to pull out.

The investor, Bosai Minerals Group from China, which has an 80 per cent stake in the company, has written to the government about its intention to sell its shares and pack out.

Bosai Minerals Group has decided to exit the country due to the non-renewal of the mining lease of the GBC which expires on January 9, 2022.

The exit of the strategic investor has led to uneasiness and apprehension among the 700 workers of the GBC who are worried about their job security and the future of the only operational bauxite mine in the country.

Many people in Awaso and surrounding communities whose livelihood depends largely on the mine have also expressed worry about the negative impact such a situation would have on them.

Compounding the problem is the fact that the existing site where the company mines bauxite will reach its lifespan in six months’ time, a situation which requires GBC to develop a nearby site, a process that could take up to a year with heavy capital outlay.

While some of the workers are calling on the government to find another strategic investor as soon as possible to develop a new site, others want a process to be activated for them to be paid severance packages when the company goes into the development stage.

Prior to the coming of the strategic investor in 2010, GBC was making a loss of around $11 million a year. The investor has turned the fortunes around and returned the company to winning ways, recording a profit of $4 million in 2019 and $6 million last year.

Also, the strategic investor has increased production from 600,000 tonnes to around 1.4 million tonnes.

In view of the exit of the strategic investor, the Board of Directors on Thursday, August 12, 2021 held a meeting on GBC premises at Awaso with the management and leaders of the workers union.

Also present at the meeting were representatives from the Ghana Integrated Aluminium Development Corporation (GIADEC), the New Patriotic Party (NPP) Member of Parliament for Bibiani-Anhwiaso-Bekwai, Mr Alfred Obeng-Boateng, and officials from the Ghana Mine Workers Union (GMWU) .

The Director of Political Affairs at the Office of the Chief of Staff at the Presidency, Mr Frank Asiedu-Bekoe, was also present at the meeting. He assured the workers of government commitment of sustaining the operations of the GBC.

The GBC branch secretary of GMWU, Mr Richard Ayiehu, told the media that the workers must be paid severance package as soon as possible.

The Chairman of the Outsourced Workers Union, Mr Emmanuel Seanehia, however, called on the government to put measures in place to protect the jobs of workers.

He said the payment of a severance package would not be in the interest of majority of the staff, especially, the outsourced workers.

“Severance means many workers, especially the outsourced workers, will lose their jobs and go home with nothing. The same problem happened at the Bibiani Gold Mines which was dormant for more than 10 years. We don’t want the same thing to happen here at Awaso,” he said.

The Board Chairman of the GBC, Mr Isaac Ofori-Poku, said the issue of severance package was too early, as the company was still in operation and discussions were still ongoing about the decision of Bosai Mineral Group to sell its stake.

He asked for the cooperation of the workers to help the Board ensure the continuous operations of the company for the benefit of the workers, Awaso and its adjoining communities, and the nation at large.

The General Manager of the GBC, Mr J. K. Fang, told the media after the crisis meeting that the GBC applied for a renewal of its mining lease in January 2020 but as of now the application was still pending.

He accused GIADEC, the company created in 2019 to hold government’s interest in the bauxite and integrated aluminium industry, of deliberately frustrating efforts to have the mineral lease renewed.

He said all efforts to get GAIDEC to spearhead and support the renewal of the mining lease had fallen on deaf ears, with GAIDEC rather giving signals that Bosai Minerals Group was no longer needed in the bauxite industry.

According to him, the mining lease should have been renewed long ago in order for the company to commit new funds to develop the new mining site.

“The existing mining site known as Ichiniso will reach its lifespan in about six months and we need to quickly develop another site in order to switch smoothly so that there will be no break in production. This process will take about a year. Our mining lease application has been pending for more than a year and a half, this means a year and a half has been wasted.

In view of this unfortunate situation, we have taken a firm decision to pack out,” he said.

Representatives of GAIDEC who were present at the crisis meeting refused to speak to the media, but sources told the media that at the meeting, GAIDEC rejected the assertions by the strategic investor.

The sources said GAIDEC was not responsible for the difficulties GBC was having in renewing the mining lease but rather it was the failure of the strategic investor to show any commitment in building a bauxite refinery in the near future which was holding up the renewal of the mining lease.

Such a commitment, the sources said, was expected of the strategic investor and was also in line with the government’s policy to turn the country from an exporter of raw bauxite into an integrated aluminium hub as part of the government’s industrialisation agenda.

However, Mr Fang refuted the response from GAIDEC and challenged it to bring any official correspondence which made the building of a refinery a prerequisite for the renewal of the mining lease.

He said even before the issue of the renewal of the mining lease came up, it had extensive discussions with the government about the building of a refinery but that did not materialise due to certain differences.

He said the Bosai Minerals Group had performed remarkably and turned the fortunes of the GBC since it took over in 2010, and therefore it was unfortunate for it to be treated in a way he described as unfairly.

“This is a company that was making a loss of around $11million annually before we took over. We have consistently reduced the losses over time, and through prudent management, the company made a profit of $6million last year.

With the strategic investor exiting the scene, the government, acting through GIADEC, which owns the remaining 20 per cent shares in the GBC, has the right of first refusal per the law and the shareholding structure.

Mr Fang told the media that Bosai Minerals Group made its intention to pack out to the government on June 30, this year, and the two sides agreed to a two-month period for the government to decide on the way forward.

“The two months will end on August 30, this year. So we are waiting for the government,” he said.