Redevelopment of Tema Motorway: 5 Interchanges in the offing 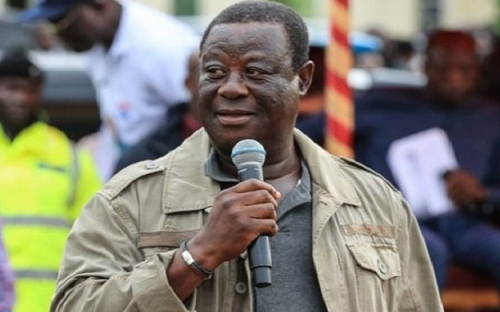 A major plan to redevelop Accra-Tema motorway will have five new interchanges and a remodelling of the Tetteh Quarshie, Apenkwa and Achimota interchanges, the Minister of Roads and Highways, Mr Kwasi Amoako-Atta, has disclosed.

The work, estimated at $570 million, will have 10 lanes, five lanes on either side, made up of four lanes of reinforced concrete freeway and six lanes of urban highway.

“The scope of work of the project is as follows: 10-lane 19.5-kilometre motorway (four lanes of reinforced concrete freeway, six lanes of Urban Highway), reconstruction of Tetteh Quarshie to Apenkwa (5.7km), remodelling of Tetteh Quarshie, Apenkwa and Achimota interchanges, and the construction of five new interchanges will be done,” Mr Amoako-Atta told the Daily Graphic yesterday.

He mentioned the interchanges as Lashibi, Abattoir, Teshie Link, Fiesta Royale and Neoplanjunction.

The minister said there would also be toll plazas, streetlights and 14 pedestrian footbridges.

Mr Amoako-Atta said the ministry in December last year signed the Commercial Contract with Mota-Engil, a stand alone contract that could not be sent to Parliament without the complement of a financial agreement.

According to experts, a Commercial Contract basically covered the works and the conditions of contract to govern the project and bind the parties.

A Commercial Contract enjoins the parties to prepare ahead of the actual contract, which goes with the financial terms.

It is different from a memorandum of understanding (MoU) which sets out common grounds of understanding, intentions and obligations of the parties to follow a series of actions, leading to the signing of the various contracts.

Mr Amoako-Atta said the Ministry of Roads and Highways, on behalf of the government, was working in close collaboration with the Ministry of Finance and other relevant stakeholders to ensure that no mandate was side-stepped and to obtain value for money in the interest of the nation.

He stressed that the ministry was an active promoter of local content and had reserved 40 per cent of work on the Accra Tema Motorway Extension Project for local contractors.

However, he explained, “when the competitive bidding process was launched in December 2018, 23 companies expressed interest, with none being Ghanaian.”

Asked how the local content policy would then be achieved, Mr Amoako-Atta explained that it would be written into the contract.

At a press conference in Parliament on Wednesday, August 11, this year, the Minority in Parliament demanded an abrogation of the $570 million Tema Motorway expansion contract which they insisted had been awarded to the South African company, Mota-Engil.

Speaking on behalf of the caucus, the Ranking Member on Transport Committee, Mr Governs Kwami Agbodza, said the contract, which was international in nature, was awarded by Mr Amoako-Atta, without parliamentary approval but under the cloak of approval by the Public Procurement Authority (PPA).

That, he said, was a complete breach of Article 181(5) which required that all international business and economic transactions be ratified by Parliament.

“The process leading to the selection of the contractor is what we have always cautioned the government against.

“If the government decides that the PPP process would not work and they still needed a developer and Mota-Engil has failed and cannot raise the funds, Mota Engil is an international company and it falls directly under article 181(5),” he said.

However, Mr Amoako-Atta said the ministry had not in any way breached the requirement for parliamentary approval for the Accra-Tema Motorway Extension Project.

It said it was, therefore, premature for anybody to claim or suggest that it had breached the law, when the documents to be submitted to Parliament had not been finalised.

“The Ministry of Roads and Highways signed a Commercial Contract. As of now, the financing arrangements are yet to be concluded,” Mr Amoako-Atta said.

The minister explained that parliamentary approval for international business transactions that had a funding component were only requested after the full complement of the commercial and financial agreement had been signed.

“Both agreements are yet to be secured by the ministry. The ministry is, therefore, yet to reach a point where parliamentary approval is required,” Mr Amoako-Atta stated.

“We are by this illumination, asking all well-meaning Ghanaians to support the ministry and the proponents to ensure a successful execution of the project when the time is due,” he added.

Drawing on some examples to explain his point, Mr Amoako-Atta said a Commercial Contract on the La Beach Road Completion Project was signed in September 2012, with similar conditions precedent and that “the cabinet and parliamentary approvals were secured in November and December 2018 respectively and the contract became effective in 2019.

“Again, on the Accra Intelligent Traffic Management Systems Project, the Commercial Contract was also signed in September 2012 with similar conditions precedent. The cabinet and parliamentary approvals were secured in November and December 2018 respectively and the contract became effective in 2019,” he explained.

Speaking to the issues, the Head of Public Relations, Mr Nasir Ahmad Yartey, said it was simplistic for anybody to do a simple calculation of cost over kilometres and conclude that the cost of reconstructing the motorway was over-bloated without recourse to the actual scope and works involved in the project.

The Ministry of Roads, he said, had not breached any constitutional requirement for parliamentary approval for the Accra Tema Motorway Extension Project.

Mr Yartey, therefore, described the accusations levelled against the ministry as frivolous, groundless and palpable falsehood, adding that the ministry, led by the minister, was ready and prepared to appear before any institution of state to defend its position.