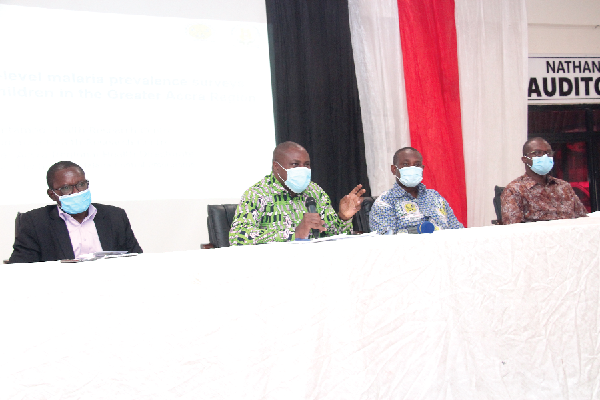 The Ghana Health Service (GHS), in conjunction with the National Malaria Control Programme, is conducting a survey on malaria parasite prevalence among children in the Greater Accra Region.

The survey is meant to provide accurate data on parasite prevalence and the burden of malaria in the various districts in the region.

The survey, which will take place over a two-week period, will start on Wednesday, September 2, and targets 300 children between six months and 10 years in all the 29 districts in the region.

At a press conference in Accra yesterday, the Deputy Greater Accra Regional Health Director in charge of Public Health, Dr. Luiz Amoussou Gohoungo, said notwithstanding the government’s effort over the years to reduce its impact, malaria still remained one of the greatest childhood killers in Ghana.

He observed that the malaria burden was influenced by the intensity of its transmission, which was very often localised in specific hotspots.

He said the data on risks associated with malaria in the country were often based on national estimates, saying that made it difficult to interpret data for planning purposes at the local level.

“That being so, this data survey seeks to bridge the gap and provide near-accurate district-level data on the burden and parasite prevalence of malaria in both urban and rural areas in the region,” Dr. Gohoungo said.

To ensure that the survey came out successfully, he said, 650 health workers had been trained to go from house to house to take blood samples of children and analyse them.

He said the health workers undertaking the survey were expected to observe the safety protocols on the coronavirus disease (COVID-19).

Giving aspects of the survey methodology, the acting Director of Research and Development at the GHS, Mr. Cornelius Debpuur, said the health workers were required to seek the concern of parents first before taking blood samples.

He said each child’s temperature would be taken to check for fever before blood was drawn from either their fingers or heels to test for the malaria parasite.

He also explained that the blood sample of every 10th child in the survey would be tested for malaria using the microscope and polymerase chain reaction (PCR) machine at a health facility.

“Any child who tests positive for the malaria parasite will be treated at no cost to the family, while findings from the survey will be used to come up with decisions that will benefit the entire family, so they can go for better treatment and interventions for malaria,” he said.

Mr. Debpuur urged parents to allow their children to participate in the process for it to become a success and allow the GHS to generate accurate information on malaria.