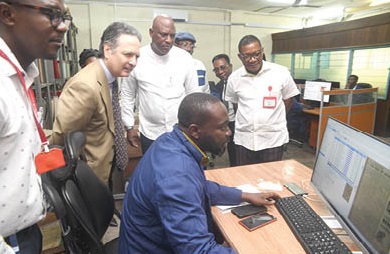 The Spanish Ambassador to Ghana, Javier Gutiérrez, has paid a courtesy call on the Managing Director of the Graphic Communications Group Limited (GCGL), Ato Afful.

The visit was to enable the Spanish Embassy in the country deepen relations with the GCGL.

Speaking during the visit, Mr Guitierrez disclosed that the Spanish Embassy would, in August this year, open a Spanish Department at the Kwame Nkrumah University of Science and Technology (KNUST) for the study of Spanish.

He said a lecturer from Spain would arrive in Ghana to work towards the creation of the department.

He explained that the move formed part of the initiative by the Embassy to get more Ghanaians to be knowledgeable in Spanish.

He said in terms of countries that spoke Spanish, the language was the second largest in the world and the third language on the Internet.

Mr Gutiérrez lamented that Spain had many scholarships for Ghanaians but because of the language barrier, many were not able to apply for them because they could not speak it.

“We have scholarships not only from the Ministry of Foreign Affairs but also different institutions from Spanish civil society and academia. We are also trying to get more Ghanaians to visit Spain for studies,” he emphasised.

Touching on the peace and stability in Ghana, he said those virtues had made the country an attractive place for investment and businesses.

He said over the years, Spain had cooperated actively with Ghana in the areas of defence and the fight against terrorism.

Reason for the visit

On the visit, the Ambassador explained that he wanted to know more about the GCGL’s operations and its priorities and also have more open interactions with the management on the way forward.

While praising the Daily Graphic for its content, he remarked that it was the newspaper he read every morning and found it more informative.

“I think you are playing a good role to preserve democracy, human rights and keeping a free open society. Congratulations!”, he said.

He expressed his interest in cultural diplomacy and wanted to know why the newspaper did not come out on Sundays.

The Editor, Graphic, Kobby Asmah, described the engagement with the Ambassador as useful, pointing out that such engagement should be encouraged if Ghana and Spain wanted to deepen bilateral ties.

He took the Ambassador through the various publications of the GCGL, touching on their histories, publication days and target audiences.

He also touched on the company’s digital platforms, which are the GraphicOnline and the Graphic Newsplus, explaining that they were meant to reach more people wherever they were with news. 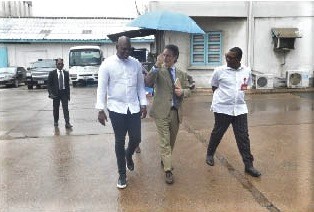 On why the Daily Graphic is not published on Sundays, Mr Asmah explained that the selling module of the company was the streets, but on Sundays people often stayed at home.

Aside from that, he said, the company wanted the Saturday publications to have a longer shelf life.

For his part, Mr Afful said the module of business in the past had been hinged on newspaper circulation and distribution, but over the last 15 years, it had become an advert funding module, with the bulk of its revenue generated through advertising and other related businesses.

He said the GCGL was not only the biggest media organisation in the country in terms of print but also has the biggest book packaging business that printed government textbooks.

He touched on the ongoing digitalisation of the old publications of the Daily Graphic, adding that once that was done, it would be able to digitalise that of the Ministry of Information because it already had the set up.

After the visit, Mr Afful, together with Mr Asmah and the Director Finance of the GCGL, Samuel Essel, took Mr Gutierrez to the Archives Unit of the GCGL to see the ongoing digitalisation of the old publications of the Daily Graphic.