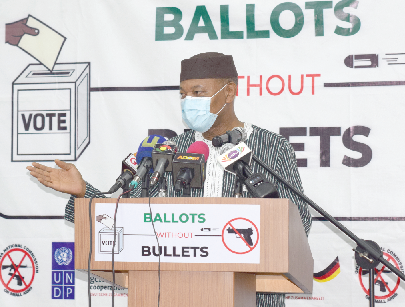 Dr Mohammed Ibn Chambas, Special Representative of the UN Secretary-General for West Africa and the Sahel, addressing the participants

The Ghana National Commission on Small Arms and Light Weapons (GNCSALW) has launched a nationwide education and sensitisation programme as part of measures to ensure peace and security during the upcoming general election.

The campaign is dubbed: "Ballots without Bullets", and it is to influence the behaviour of the public through education on the dangers and abuse of guns before, during and after the elections.

Ten hotspot constituencies identified by the Ghana Police Service as likely to experience violence in the upcoming general election will be the focus of the campaign.

The GNCSALW is embarking on the assignment, in collaboration with the United Nations Development Programme (UNDP) and the German Cooperation Agency (GIZ).

At the project launch in Accra yesterday, the Special Representative of the UN Secretary-General for West Africa and the Sahel, Dr. Mohammed Ibn Chambas, said the proliferation of small arms and light weapons in the country remained a major challenge that must be addressed.

Some participants at the launch

According to him, for peace to prevail in Ghana before, during and after the elections, there was the need for the conceivable negative influence of arms in the electoral process to be mitigated.

“Small arms and light weapons are adjudged to be the most immediate security challenge in West Africa, fueling civil wars, organised criminal violence, insurgency and terrorist activities and posing great obstacles to sustainable security and development. The dangers of illicit proliferation, misuse and abuse of small arms and light weapons cannot be overemphasised,” he said.

The UN representative said the 2020 presidential and parliamentary elections would present Ghana with the opportunity to show to the world, once again, that it had matured democratically.

He cautioned, nonetheless, that “if not properly managed properly, the threat of electoral violence risks rolling back the country’s development dividends”.

Some dignitaries present at the launch were the Deputy Resident Representative of the United Nations Development Project, Ms. Silke Hollander; the Charge d’Affaires of the German Embassy in Ghana, Mr. Helge Sander; a Deputy Chairman of the Electoral Commission, Dr. Eric Bossman Asare, and the Director General, Special Duties of the Ghana Police Service, Commissioner of Police, Mr. Christian Tetteh Yohunu.

The Executive Secretary of the GNCSALW, Mr. Jones Borteye Applerh, called on civil society organisations, religious and faith-based organisations, traditional leaders, the public and the media to rally behind the government and the commission in their efforts at fighting arms proliferation in the country.

“We are a nation with one destiny, and it is for this reason that we should not allow people with criminal intents to perpetrate armed violence on us and destroy our beautiful country. It is the duty of the commission and the citizenry to prevent people from perpetrating gun violence on us and also not derail the progress we are making. We have to speak about it continuously,” he said.

For his part, Dr. Asare was optimistic that the upcoming elections would be the most peaceful in Ghana’s history.

“We will continue to collaborate with other governmental agencies and the security services to secure the electoral process, so that the will of the people will prevail,” he said.