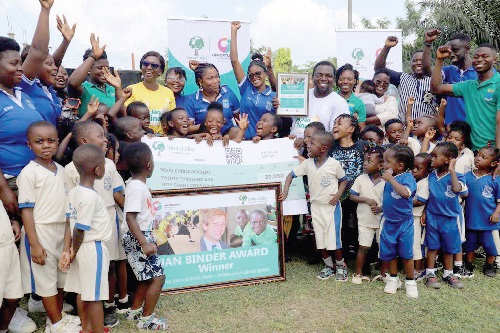 Araba Mosner-Ansong (4th from left), International Programme Manager, Sinapi Aba, joins jubilant pupils and teachers of the Royal Choice Academy after she presented a dummy cheque for GH¢20,050 to the school for emerging winners of the 2022 Jan Binder Awards
30.5k Shares

Royal Choice Academy, in the Ashanti Region, has won the 2021 edition of the Jan Binder Award for adhering to cleaner and greener environmental practices at its premises.

It was followed by Unique Educational Complex and Melchizedek & Abraham Precious School.

The awards were each accompanied with a citation of recognition.

The annual awards programme is an initiative of Sinapi Aba Savings and Loans and Opportunity International Germany, which seeks to acknowledge schools that adhere to a cleaner environment and prioritise the good health of school children.

Speaking at a short ceremony held at Low Cost at Konongo last Saturday to honor the awardees, the International Programmes Manager at Sinapi Aba, Araba Mosner-Ansong, said that three schools would be rewarded every year, and that the scheme had come to stay.

Touching on the main criteria required of a school to be selected, she emphasised that “we consider schools that have clean classrooms with waste bins which are emptied regularly, decent toilet facilities, clean compounds with hand washing facilities and green environments, among others”.

A Co-Proprietor of Royal Choice Academy, Stephany Adiza Asamoah, on behalf of all the awardees, commended the organisers for the kind gesture and that the honour would rather propel the schools to even become more conscious about their environment.

She said the well-being of school children had direct impact on their academic performance and urged all schools to maintain cleaner and greener environments at all times.

Jan Binder was a young man from Germany who had a strong interest in ensuring that schools from deprived communities were environmentally conducive for kids.

He met his untimely death while on a visit to Ghana, and to keep his memory alive, his mother (Martha Binder), every year, cycles around Germany to raise funds to reward three schools who are environmentally inclined.