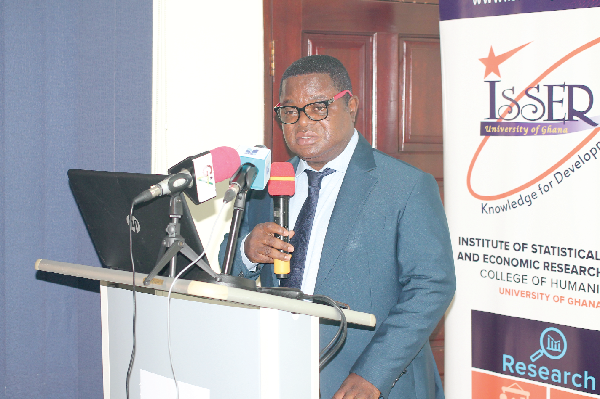 The Institute of Statistical, Social and Economic Research (ISSER) of the University of Ghana, Legon has called for the review of the 2022 Budget, particularly the proposed E-levy of 1.75 per cent.

According to the Director of ISSER, Professor Peter Quartey, the levy, as it stood now, was punitive and could have a negative impact on financial inclusion, the development of a cash-light economy and the potential acceptance and usage of the yet-to-be-introduced Central Bank Digital Currency (e-cedi).

He, therefore, recommended a reduction of the levy, saying ''an E-Levy of 0.5 per cent to 0.75 per cent can yield significant revenue, since many people will use the service and will pay with less hesitancy''.

Prof. Quartey made the call at ISSER's 2022 Budget Statement Review held at the University of Ghana, Accra yesterday.

The director said while taxing electronic transfers could result in low price elasticity of demand for electronic financial services and significant additional revenue to the government in the short term, its implications on E-business and other transactions would have a telling effect on the cost of doing business, output, employment, as well as cost of living.

Prof. Quartey added that the E-Levy would reduce electronic-based tax revenues, while the tax-avoidance tendency would also breed major transactional and economic inefficiencies.

He urged the government to make public the empirical study that underpinned the proposed levy for further stakeholder consultations.

“If we must have additional revenue from taxes, interest receipts as income, rather than the principal, via tax withholding for instance, may be a better strategy.

We can properly raise the annual licensing tax on ‘luxury’ vehicles if well designed,” he said.

Touching on other revenue measures outlined in the budget, Prof. Quartey, a renowned economist, mentioned the suspension of discount on benchmark import values, which he said offered some competitive space to domestic producers as import prices increased.

He also opined that the zero-rated public road tolls would increase productivity due to reduced traffic and fuel, with the resultant loss of jobs at the toll booths.

The director urged the government to avoid jobless growth by investing in critical sectors of the economy, as unemployment remained a challenge.

He urged the government to take advantage of the increase in the prices of commodities such as cocoa, gold and oil by using the gains to diversify the economy.

On agriculture, Dr Andrew Agyei-Holmes, who led the presentation on the sector, said despite COCOBOD securing a revolving fund to support indigenous businesses, the regulatory environment still posed a challenge.

To make the most out of the $200-million fund, he said, it was critical that COCOBOD sped up the development of the regulation guidelines for small-scale processors.