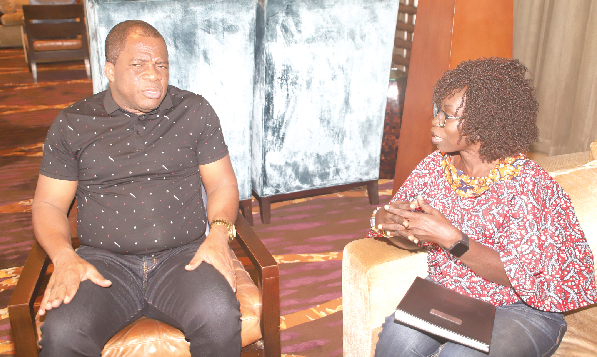 The General Superintendent-elect of the Assemblies of God (A G), Ghana, Rev. Dr Stephen Yenusom Wengam, has challenged the church to disciple people on leadership.

He said with majority of the people being Christians, it was important to ensure that the ideals and tenets of the faith reflected in all facets of life, including politics and business.

"Christians are called to be the light and salt of the world, so we have to be intentional about raising and nurturing members to go into politics with the Christ agenda to affect society positively and not for personal gain," he said.

In an interview with the Daily Graphic after his election last Thursday to assume the mantle of leadership of the AG, Ghana, the General-Superintendent-elect added that the church must institutionalise excellence to help turn the fortunes of the country around.

"The church must institutionalise excellence to reflect the image of the excellent God we serve. At the moment, instead of the world copying Christians, we are rather copying and being swallowed by the world.

"That is mediocre, but the God we serve is one of excellence and we must make a deliberate effort to reverse that," he said.
Election

He secured 1,856 votes, representing 60 per cent of the 3,046 total votes, ahead of three other candidates to serve a four-year term.

The other aspirants were Rev. Dr Savior Kofi Apedo, Rev. Dr Bismark Kwame Bansah, the immediate past General Secretary of the church, and Rev. Dr Sam Ato Bentil, a former Treasurer of the church.

He takes over from Rev. Professor Yaw Frimpong-Manso, who has completed three four-year terms, having been elected as the fifth General Superintendent in 2010.

Rev. Dr Wengam said it was wrong for the church to think that once souls were won over, it was enough to get them to impact society, without deliberately discipling them to make their belief and faith part of their lives.

He said the church could help raise change-makers by planning, organising and grooming people to take up roles in every sector of national development.

“The issue about corruption is not only about politicians but also ordinary people. There are some societies that do not describe themselves as highly religious, yet they have values that are not compromised.

“As humans, it is not everyone who easily overcomes temptation, but if Christians are made to understand what it is to be the light and salt of the world, living the faith at all times and not when it is convenient, I believe we can help change the narrative,” he said.

“It is true that times are hard, but that does not mean that we should throw away all the moral values that shape and preserve society — honesty, truthfulness, hard work, tolerance and unity. We cannot, under the disguise of finding a means to an end, throw these away and expect to succeed,” he added.

According to him, he intended to place premium on the youth and make the church attractive to them, without compromising on the tenets of the faith.

Asked what legacy he would like to be remembered for after his tenure, he said: “I will champion visionary and progressive leadership anchored on integrity, aggressive church plant and discipleship.”