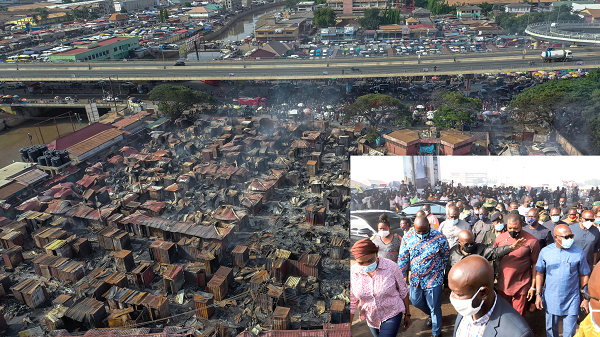 President Nana Addo Dankwa Akufo-Addo has described the fire that razed the Odawna Pedestrian Shopping Mall as “a big tragedy” and has assured the victims of the government’s urgent support to enable them  to restart their businesses.

For a start, he said, relevant organisations would come round to compile the details of the victims for support.

Additionally, he said, the government had also decided to rewire all markets in Accra to forestall such sad incidents.

President Akufo-Addo gave the assurance when he visited the market, located near the Kwame Nkrumah Interchange in Accra, which caught fire yesterday dawn resulting in hundreds of shops being razed to the ground and the wares of over 3,000 people completely destroyed.

In a bizarre twist, however, the large number of victims who initially appeared sad and were counting their losses, immediately burst into an ecstatic mood when the President arrived at the scene with shouts of  “Four More To Do More” and “Nana Show Boy”.

The noise was so deafening that journalists could hardly hear anything from the President’s interaction with a team of officials who were also present at the scene.

President Akufo-Addo, sporting a black face mask, walked through the market to inspect sections that were, choked with scattered pieces of remains, as smoke still filled the air.

He spoke to officials from the Klottey Korle Municipal Assembly, the National Board for Small Scale Industries (NBSSI) and the victims, and fire personnel who were on the ground.

The Chief Executive Officer (CEO) of the NBSSI, Mrs Kosi Yankey-Ayeh, told the President that her outfit had commenced discussions with the Klottey Korle Municipal Assembly to identify the victims and offer financial support.

She was confident that with the progress of work done so far, the NBSSI would be able to give financial support to the affected persons.

The Ghana National Fire Service (GNFS) has, meanwhile, asked all metropolitan, municipal and district assemblies (MMDAs) to put in place safety measures and effective monitoring systems to curb the rampant fire outbreaks in markets across the country.

The service has also called on MMDAs to ensure that access routes were created in the markets so that personnel of the GNFS could go in and out of the markets freely to fight fires.

The Head of Public Relations of the GNFS, Divisional Officer One (DO1) Mr Robinson Okoe, said failure by the MMDAs to put in place robust fire safety measures hampered efforts made to curb market fires.

“Going forward, we will have to look at what I call the Kaneshie Market model. You will hardly hear of a fire outbreak at the Kaneshie Market in Accra, and it is because we have trained people to move through the market after close of work every day to ensure that there is no naked fire around.

“Anybody who is found to have set fire in their shop after close of work is fined, and because of that everyone is careful,” Mr Okoe said.

The fire at the pedestrian shopping mall is reported to have started at about 12 a.m., and took a 50-man team from the GNFS using eight fire engines more than six hours to bring the fire under control.

When the Daily Graphic got to the market at about 6:30 a.m., the fire had been brought under control and stopped from spreading to other parts of the commercial enclave as the GNFS team still fought to quench it completely.

Many of the traders were counting their losses while others tried to salvage some of their wares.

An eyewitness, Mr Obed Acquah, told the Daily Graphic that the fire originated from two boutiques.

“We tried to open the shops to fight the fire but the owners thought we wanted to take advantage of the situation to steal their wares so they initially prevented us from opening the shops until things got out of hand,” he said.

Some eyewitnesses also blamed the GNFS for arriving late. They also accused the GNFS of being lackadaisical in their approach to tackling the inferno.

However,  to assertions by the eyewitnesses, Mr Okoe said the fire fighters responded timely.

“We were not called immediately the fire started as they rather tried to fight it on their own until things got out of hand. Reports indicate that the fire started at about 12 a.m. but we were called at 2:20 a.m. when the fire had already done its worst,” he said.

He said the GNFS team could not get into the market when it got to the scene because it was inaccessible due to the poor plan of structures in place.

“There are containers all over the place and these have been placed haphazardly; and we had to use the same strength needed to fight the fire to push the containers away   to have access to the market.

“As we speak now, there are still some metal containers that are locked, but still have fire inside them. Some of the metal containers even have gas cylinders in them and we needed to be careful with our lives too,” he added.

Although the cause of the fire  is yet to be established, the GNFS is suspicious that it might have resulted from a naked fire that was not supervised or an electrical fault.

Mr Okoe said the GNFS would conduct a full-scale investigation into the cause of the fire and would make its findings known to the public.

The Odawna Market is fire-prone as it records a fire outbreak almost every year. In 2019, the market was ravaged by fire, with many traders losing their livelihoods.

“Last year, the GNFS conducted investigation into the causes of fires at the Odawna Market and presented its report, with recommendations, to the Accra Metropolitan Assembly (AMA) but not much has changed,” Mr Okoe said.