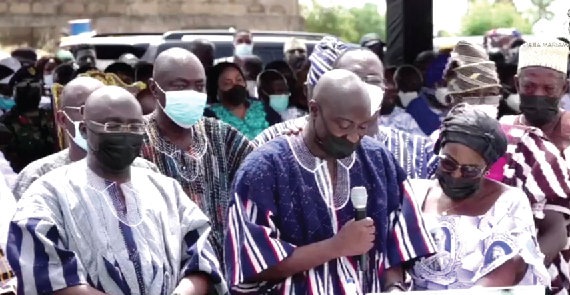 Hundreds of sympathisers from all walks of life yesterday converged on Walewale in the North East Region for the 40th day adua (Islamic funeral) of Hajia Mariama Bawumia, mother of the Vice-President, Dr. Mahamudu Bawumia.

President Nana Addo Dankwa Akufo-Addo and the First Lady, Rebecca Akufo-Addo, led a high-powered delegation of state actors to mourn with the Vice-President and his family.

The event was also graced by a delegation of the Asantehene, Otumfuo Osei Tutu II, and other traditional rulers from various parts of the country.

Also in attendance were Members of Parliament, political party representatives and religious leaders.

Kperiga, venue of the funeral, was the scene of drumming and dancing by various cultural troupes, whose performances were interspersed with customary traditional rituals.

The National Chief Imam, Sheikh Osman Nuhu Sharubutu, led a congregation of Muslim faithful for a Quranic recitation and supplications (adua) for the soul of the deceased and the bereaved family.

She was laid to rest at the family house at Kperiga next to the grave of her late husband, Mumuni Bawumia.

Other children, aside from the Vice-President, are Yakubu Bawumia, Musah Bawumia, Abraham Bawumia and Abdulai Bawumia.

President Akufo-Addo, in a tribute, described the late Hajia Mariama as an outstanding woman who paid her dues to the country.

He said she did Ghana a profound favour by giving the country an outstanding and first-class Vice-President in the history of the Fourth Republic.

"Hajia Mariama was also the mother of the man generally acknowledged as the most outstanding Vice-President of the Fourth Republic,” he said.

"She was a woman of unfailing courtesy; she always made colleagues and friends of her son very welcome to the home. A remarkable woman who was a devoted wife of one of the most prominent statesman of her era," the President added.

President Akufo-Addo noted that the late Hajia Mariama was one of the faces who fought for freedom and independence in Northern Ghana.

He added: “There are not many who can lay claim to such relationships, a member of the independent generation who bore the vicissitudes of the national struggle for freedom and independence. We thank her for her service to the family, community and nation. May her soul rest well".

Otumfuo Osei Tutu described the late Hajia Mariama as a “steady heart behind one of the titans of politics in the north during the most tumultuous periods of Ghana’s history”.

He said her guidance and tutelage led to the production of a family whose impact on Ghanaian politics would be felt for generations.

Some residents, who spoke with the Daily Graphic, said Hajia Mariama lived a fulfilled and dignified life and paid her dues to the State.