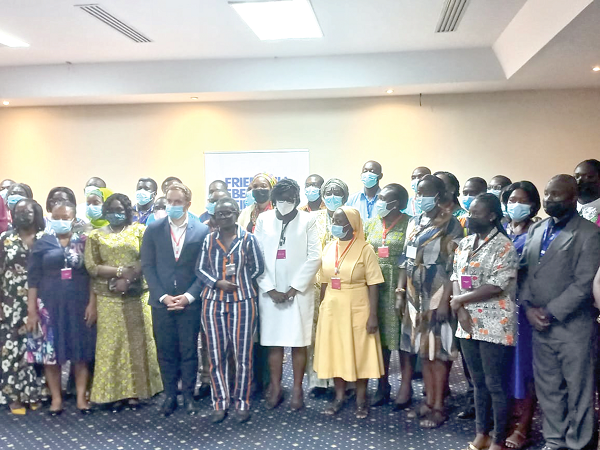 Professor Akua Opokua Britwum (arrowed), a Lecturer at the University of Cape Coast, with some participants Follow @Graphicgh

A Lecturer with the Department of Labour and Human Resources Studies of the University of Cape Coast (UCC), Professor Akua Opokua Britwum, has observed that with the advent of digitalisation, many more jobs will soon fade and this could pose a challenge to employment in the country.

She said gradually, technology was taking away jobs hitherto performed by humans as a means by companies to cut down on cost of production.

For instance, she said, in the financial sector most of the transactions were being done through digital platforms, thus reducing human contacts.

“You realise that fewer people are going to the banks now to get money. They are using the ATM and fewer people are also paying for goods and services with cash and it is only a matter of time when our reliance on cash will go down and so banking as a result has changed considerably,” she said.

Prof. Britwum said this when she delivered the keynote address last Friday at the Women in Economic Transformation Forum which was the on the theme: “The future of work-gender and informality in Sub-Saharan Africa.”

The forum was organised by the Economic Policy Competence Centre of the Friedrich Ebert Stiftung (FES) in collaboration with the Women Economists Network (WEN).

In order to reverse the trend and ensure that people do not lose their jobs, she said, there was the need for the state to take a central role to invest in Artificial Intelligence (AI) and use the benefit to create more jobs for Ghanaians.

“AI is going to make certain jobs disappear and if it is being introduced by a capitalist then the objective is to reduce cost.

“Because they want to reduce cost, people will lose their jobs, but if AI is being pushed by the state to benefit people, because of the higher productivity, the profit that is made by the state can be invested in other sectors to create new jobs.

“The question now is how the Ghanaian state will set itself up to be able to predict what new jobs will be required to replace those that are being lost by automation,” Prof. Britwum said.

She warned that if the state did not take a central role, most Ghanaians would lose their jobs.

That notwithstanding, Prof. Britwum said, the labour front in Sub-Saharan Africa was not threatened which compared to advanced countries due to the lack of the needed infrastructure for the full automation.

She added that due to the availability of cheap labour, some companies found it more economically viable to employ humans than investing in AI.

Objective
The Resident Director of FES, Mr Johann Ivanov, said the objective of the forum was to create a network of women economists who would play active roles in shaping the economic development of the country.

According to him, “we feel that women ideas on economic policies are not properly reflected yet in the current debate.”