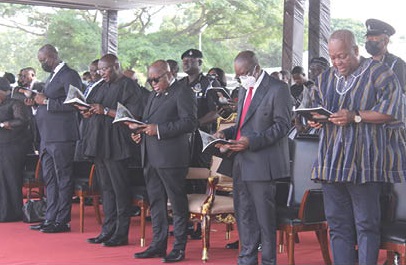 High profile personalities including politicians, legal practitioners, political activists, religious and traditional leaders yesterday paid their last respects to a former Member of Parliament (MP) for Zebilla, John Akparibo Ndebugre, who passed on in May 6, this year, aged 72.

A pre-burial service at the State House in Accra attracted personalities including President Nana Addo Dankwa Akufo-Addo; the Vice-President,

The casket containing Ndebugre’s remains was opened to the public for filing past as early as 8 a.m.

The mourners took turns to file past the body to bid farewell to the former lawmaker and lawyer at the solemn event, which saw various tributes eulogising the statesman and consoling the bereaved family.

Many of the mourners, including the immediate family members, were adorned in black.

The casket was closed at 9:45 a.m. after the family and clergymen from the Christ the King Parish in Accra had filed past their beloved, who served as the PNDC Secretary for the Northern Region during the Rawlings era.

The remains of the late former MP are expected to be flown back to Zebilla, where he will finally be laid in state.

This will be followed by a private burial in his hometown, Timonde, near Zebilla in the Upper East Region.

In a tribute read on her behalf by Rebecca Asumda, the widow, Mrs Sophia Ndebugre, said her late husband’s love for her was so strong that no third person could come between them.

According to her, their marriage would always be her greatest accomplishment in her life.

“He taught me a whole lot - how to carry myself in public as a lady, eat at table, speak English and much more.

“He was such a straightforward man. He never minced his words; he stood for truth and would always say things as they were.

“We had our own challenges along the line, but through it all, the love we had for each other pulled us through,” she added.

In a tribute read on behalf of Parliament, the Deputy Clerk in charge of the Legislative Management Division, Ebenezer Ahumah Djietror, said when he was in Parliament, the former legislator always placed the nation first above partisan politics and the “negative polarisation” that he thought had bedeviled the country.

He said deeply etched in the fibre of Mr Ndebugre’s debates was the desire to ensure transparency and accountability in the disbursement of public funds.

“The fundamental thrust of his debates was education-centred, always reiterating the importance of capital investment by the government in education, especially in deprived communities,” he added.

In his exhortation, Rev. Fr Donatus Pallu of the Christ the King Parish in Accra urged the mourners not to allow the benefits derived from society to rob them of their moral values.

“God is telling us in the book of Timothy that he has fought a good fight.

“My dear people of God, what are we fighting and what are your standards, philosophy with which you live your life?” he asked.

He further urged the mourners to emulate the good virtues exhibited by the late MP and rise to the occasion when they would eschew all forms of laziness and apathy for the ultimate good of the country.